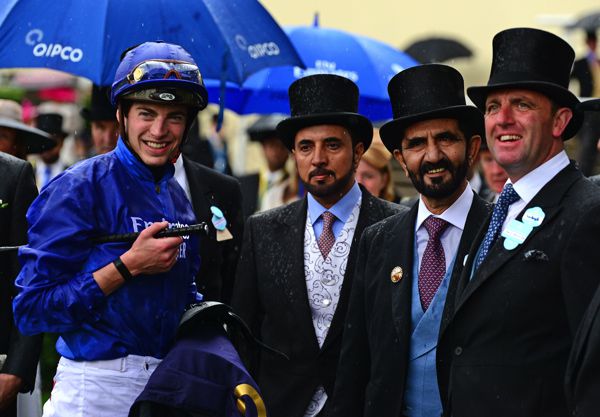 Blue Point seeks to continue his love affair with Ascot and complete a famous double in Saturday’s Diamond Jubilee Stakes.

In successfully defending his crown in Tuesday’s King’s Stand Stakes, the five-year-old was claiming his fourth win in five appearances at the Berkshire circuit — his only defeat coming in the 2017 Commonwealth Cup when a close-up third behind Caravaggio and Harry Angel.

A step back up from five to six furlongs is not seen as a major hindrance to a horse who has won seven times over the longer trip — including twice over the Diamond Jubilee course and distance.

The obvious question is whether Blue Point can run up to his very best just four days after his latest triumph.

However, Charlie Appleby could not be happier with how his charge has taken those exertions ahead of his bid to follow in the hoofprints of the Australian speedball Choisir — the last horse to complete the King’s Stand-Diamond Jubilee double in 2003.

“It’s a very sporting decision by His Highness (Sheikh Mohammed) and we all think it is the right thing to do,” said the Newmarket handler.

“He always seems to bring his A-game to Ascot and he broke the track record over six furlongs there a couple of years ago.

“This is his last season in training and he’s only got two more opportunities to run at Ascot — in the Diamond Jubilee on Saturday and on Champions Day in October, by which time the ground might have gone for him.

“Looking at the forecast, it looks like the ground will be good again by Saturday and we think he deserves to take his chance.”

The ante-post favourite for the last month has been the James Tate-trained Invincible Army, who could hardly have been more impressive in winning the Cammidge Trophy at Doncaster and the Duke of York Stakes this spring.

Tate did not anticipate having to take on Blue Point at the start of the week, but is thrilled with the condition of his own stable star.

He said: “I’m just concentrating on my own horse and he seems in very good form. I wasn’t happy to see the rain falling for my horse in the Royal Hunt Cup (New Graduate) on Wednesday, but I was pleased for Invincible Army.

“It looks like the ground will be on the slow side of good come Saturday, which will be perfect, and his preparation has gone perfectly.

“I’m very happy with my horse and now it’s time for him to take on the best and see if he can beat them.”

Last year’s second and third in Stephane Wattel’s City Light and Wesley Ward’s Bound For Nowhere are back for more, while the 2017 winner — James Fanshawe’s The Tin Man — is out to regain his crown in one of the key races in the sprint division of the Qipco British Champions Series.

The latter will need to improve significantly from his comeback third at Windsor last month, but his trainer is confident he can, ahead of the latest race in the Qipco British Champions Series.

Fanshawe said: “He had a 7lb penalty (at Windsor) and it was a messy race, plus a couple of weeks before he had a bit of muck on his chest. He’s always been prone to that — it’s something we always have to keep an eye on with him.

“The most important thing is that he’s had a run. He’s never been one to show you a great deal at home, but he looks really well in himself and he’s in good form. You never quite know with him until you run, but I’ve been very happy with his preparation.”

The winner of that Listed event at Windsor was the Sir Michael Stoute-trained Dream Of Dreams, who is in opposition again.

“Dream Of Dreams is a solid Group-race performer,” said Stoute.

“He didn’t pick one up last year when he got beat in a few photos. I have been very pleased with his two runs this year.”

Richard Fahey’s Sands Of Mali rounded off his 2018 campaign with victory in the British Champions Sprint at this venue, but has not yet rediscovered his best form this year — finishing sixth behind Blue Point in Dubai and third when a hot favourite at Hamilton.

Fahey said: “Don’t get me wrong, I was disappointed he got beaten at Hamilton, but on reflection he was taking on two very fit horses (Brando and Donjuan Triumphant) and they went a very good gallop and it just found him out.

“I’ve been very happy with him since and he’ll be wearing a tongue-strap for the first time.”

Like Blue Point, Le Brivido turns out for the second time this week after finishing fifth in Tuesday’s Queen Anne Stakes.

Trainer Aidan O’Brien said: “We had it in the back of the mind that he might not stay a mile, so that is why he was put in this race.

“If everything is well with the horse, we will let him take his chance. I thought he ran well in the Queen Anne, just the trip was a little too far.

"I think races over six and seven furlongs could be his trip."