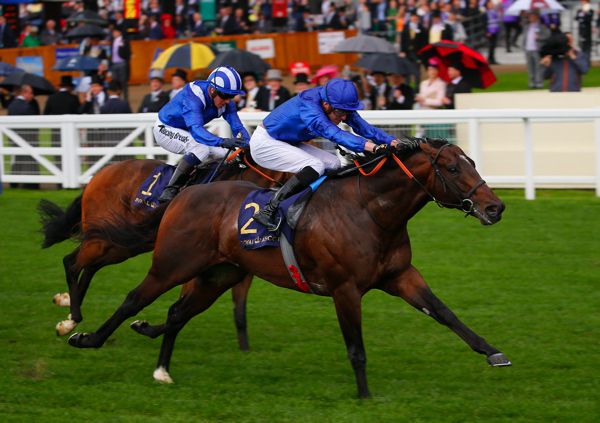 Tuesday's King's Stand hero Blue Point is one of 18 horses declared for the Diamond Jubilee Stakes at Royal Ascot on Saturday.

Charlie Appleby's speedster successfully defended his King's Stand crown with a tremendous performance to see off old foe Battaash on the opening day of the showpiece meeting.

The five-year-old will now bid to become the first horse since Australian raider Choisir in 2003 to win both major sprints in the same week.

Appleby told Press Association Sport: "He's come out of Tuesday’s race well and it was always in the back of our minds that we might do do this, but we didn't want to say too much after Tuesday's race because we wanted to see how he came out of it.

"He was obviously entered in both races and he seems to have taken the King’s Stand well. He had some light exercise this morning and looks great and has eaten up — he’s doing all the things you’d want him to do if you’re thinking about running again a few days later.

"After discussing it with His Highness (Sheikh Mohammed), we decided we’d declare him and it still gives us another 48 hours to check everything is fine with the horse.

"We think he deserves to take his chance."

The James Tate-trained Invincible Army has been the star of the six-furlong division so far this season - impressing in the Cammidge Trophy at Doncaster and the Duke of York Stakes.

Last year's second and third in Stephane Wattel's City Light and Wesley Ward's Bound For Nowhere are back for more, while the 2017 winner - James Fanshawe's The Tin Man - is out to regain his crown.

Like Blue Point, Aidan O'Brien's Le Brivido and Michael Pitman’s New Zealand challenger Enzo’s Lad are both turning out for the second time in the space of five days, having finished down the field in the Queen Anne and King's Stand respectively.

Other contenders include Sir Michael Stoute's Dream Of Dreams and the Richard Fahey-trained Sands Of Mali.