Boghlone Honey very much on an upward curve for Cusack 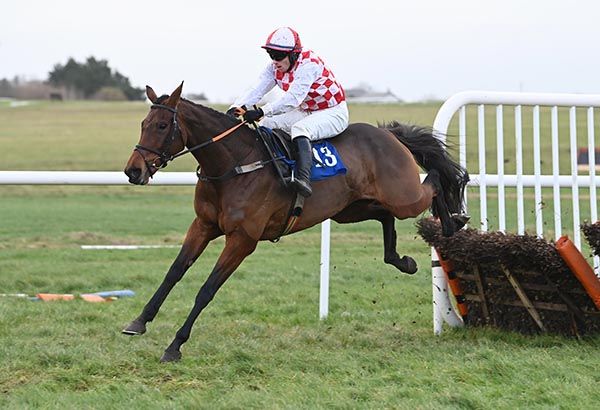 Boghlone Honey recorded her second win this season when taking the Holycross Handicap Hurdle in very impression fashion under Richie Deegan at Thurles.

The Liam Cusack-trained mare, placed a few times in the past but generally disappointing in a light campaign last season, has returned in great heart winning both her completed starts.

The 9/2 joint favourite was sent to the front entering the home straight and soon stretched clear to score by a very easy 14 lengths.

The Newell family-owned pair Know The Game and Peace Party filled second and third places with the other joint favourite Our Bobby in fourth.

Cusack said, "She has a little nick on her tendon now which I'm worried about to be honest and we mightn't see her for a while unfortunately.

"It was unfortunate what happened at Naas the last day (unseated rider at the first) but she came on from Sligo, she felt very well and I was very happy with her at home. It was more competitive than Sligo and she did it well today.

"John (Murray) is from Offaly, is based in Boston and is supporting me well. She is a nice mare for him."

Impressive Galway juvenile maiden winner Paris Secret has been sold to continue her racing career in America, with her Tyrone-based trainer Andy Oliver reporting the news.

Marine Nationale may be kept fresh until March

Royal Bond winner Marine Nationale may not run again until the Cheltenham Festival, his trainer and owner Barry Connell has revealed.