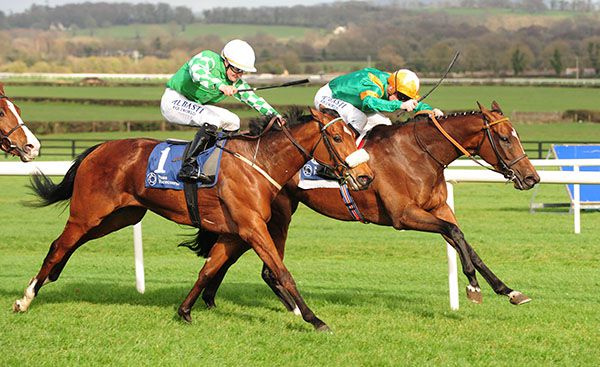 Normandel held the late charge of Hand On Heart to bring up a terrific treble for Jim Bolger and Kevin Manning on the opening day of the Flat season at Naas today.

The French import, a Listed winner in her native land, had one outing for Bolger last season when fourth in the Finale Stakes here in November.

She went to post a 14/1 shot for the Lodge Park Stud Irish EBF Park Express Stakes today and was held up in the early stages of the Group 3 contest over a mile.

Manning produced her to challenge two furlongs from home and she disputed with 6/4 favourite Yulong Gold Fairy passing the one pole.

Having got the measure of that rival over 50 yards from the line the Le Havre filly then has to repel the flying finish of 20/1 shot Hand On Heart, holding on for a head win.

Bolger said:- “She ran well here at the backend. I only had her for a while after she came from France. She got a bit tired in the last furlong that day, and we were expected that she could build on it.

“She will stay at around seven furlongs or a mile. She won a Listed race in France at a mile and a quarter but I think she’s better at seven or a mile.

“She handles that ground well. She’s a very sound filly and I’d imagine she will go on better ground as well.”

Bolger had also won earlier with 20/1 shot Western Dawn and 16/1 shot Solar Wave making it a stunning 5354/1 treble on the day.