Borice takes the Plate for Elliott and Dempsey 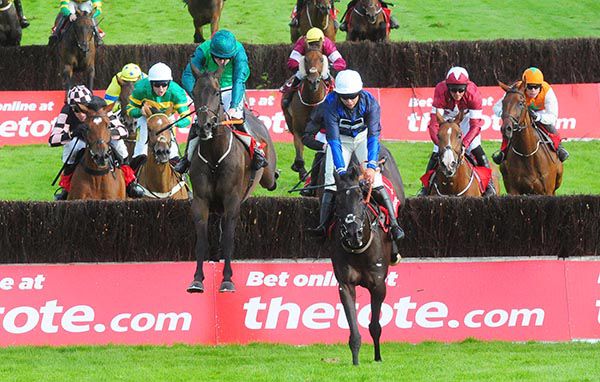 The feature race on day three of the Festival, the tote.com Galway Plate Handicap Chase, produced a thrilling finish as there were plenty of horses in with a shout as the runners swung into the home straight having completed all the jumping.

The principals were spread right across the track a furlong down, and nearest the stands’ rail it was Borice (9/1) under Luke Dempsey who found a bit extra to score by three and-a-quarter lengths from the gallant topweight Black Corton (12/1).

The latter was trying to concede 22 lbs to the winner, and gave his all for Bryony Frost.

Snugsborough Benny (8/1 jt-fav) ran well in third after quite a bad mistake early on, while Peregrine Run (14/1) rallied well up the hill for fourth.

The other 8/1 joint favourite, Movewiththetimes unseated rider about a mile from home.

It was a third win in the last four years in the Plate for the winning trainer Gordon Elliott, who said: “I was worried about the ground with this lad.

"I thought it was too dry for him and I was humming and hawing about whether to run him but Simon flew over from Nice this morning and Anthony Bromley came over, and it was brilliant, unbelievable.

“He was sent over to us by Simon and Isaac and the plan was to go for good, big staying chases.

"I fancied him in the Paddy Power last year, but I’d say he hadn’t filled into himself after coming from France and maybe I ran him a bit soon.

"But that was great he won today, and he’ll be a nice horse for all them staying chases.

“It’s been a lucky race for us, and it’s nice to win another Galway Plate. We thought he was (our leading contender) all along — he was paper favourite this morning but obviously drifted a bit with the ground.

“We’ll enjoy today and dream about it but that was what he was sent to me for - to be an English National horse.

“Luke gave him a super ride, and there’s no stronger jockey at that weight.

"He’s been around the yard a long time, and I’m good friends with his father, Philip, and it was nice for them that he won it.“

Paul Nicholls was proud of the runner-up as he remarked: “It was a fantastic run under that weight and Bryony said she got into a bit of trouble with a loose horse.

“We were asking a lot of him with that weight but he’s not easy to place. It’s great to come here and have a really good run.”