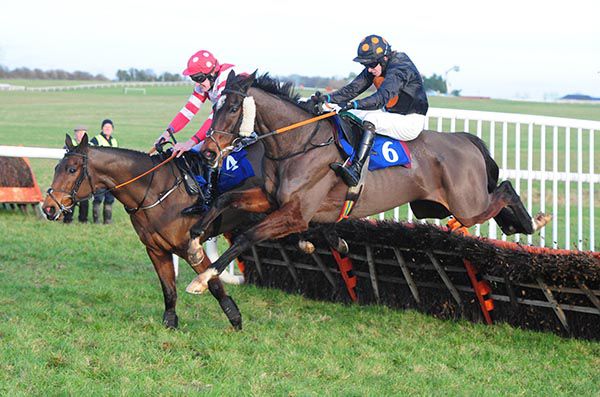 Henry de Bromhead recorded a quick double on the card at Thurles this afternoon when the veteran The King Of Brega ran out a game winner of the Jimmy Neville Memorial Handicap Hurdle.

The 11-year-old pressed leader Political Policy throughout in the two-miler and they settled down to fight it out before the final flight.

There was nothing between in the pair in the closing stages with The King Of Brega just finding more close home to secure a neck victory under Dylan Robinson.

The 11/1 winner was dropping right back in trip having been fourth over three miles when last seen in action over hurdles at Clonmel last month.

He had finished second in the Up The Yard Challenge Race at Punchestown since that run over timber.

"He is an amazing horse and very rarely runs a bad race and it doesn't seem to matter what trip,” said de Bromhead.

“He is a pleasure to have around the yard and he is getting older like myself but he is good and Dylan was brilliant on him.

"We'll see whats coming up and we'll play it one day at a time but he can do anything - he even ran on the flat in the Up The Yard Race the other day and was only just chinned in that."