Brushwork another for red-hot Levins 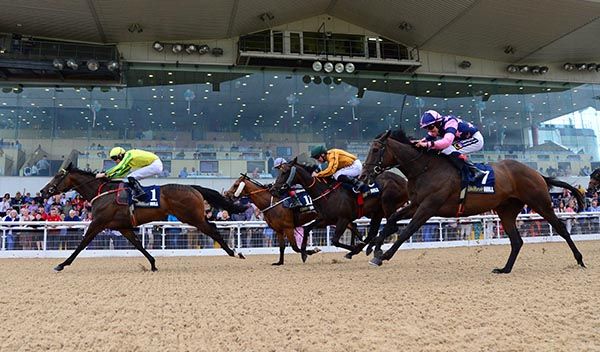 Brushwork provided Johnny Levins with yet another success, as he justified favouritism in the William Hill Play Responsibly Claimer.

Sent off an easy-to-back 5/2 favourite (from 15/8), Brushwork was settled behind the leaders by Donagh O'Connor and was fourth from halfway.

Ridden to challenge from the two furlong pole, he edged to the front just inside the final furlong, keeping on well from there to score by a length for owner David Spratt. Gatsby Cap (8/1 from 18s in early shows) ran on nicely to take second under Ronan Whelan for Jimmy Coogan, while Sister Rosetta (14/1) was half-a-length back in third.

Levins said afterwards: "I've probably made two mistakes with this horse - first one is I took him out of the Scurry (at Curragh on Saturday) at the last minute thinking I would save money, foolishly. Second mistake was probably running him in this race because I would imagine I am going to lose him and he's a nice horse.

"My thinking was the yard is on a roll and we need to keep getting the winners. He was the class horse in the race and, if he turns up, he would win. We took the chance, we won and now we will sit and see if he is claimed. If he is claimed, best of luck to the next person. If not, we will be very happy.

"I had no problem (with the trip), I was reading the reports and everything but it was never a concern for me. Those good horses that try really hard, if you start picking one trip for them it makes the calendar very, very small."

After the race James McAuley claimed the winner for E15,000 and Guessthebill (5th) for E5,000. Runner-up Gatsby Cap was claimed by John McConnell for E6,000 while Patrick McKenna snapped up Tammany Hall (9th) for E6,000.

L.T. McAteer, rider of Sense Of Romance trained by Lee Smyth, reported to the Clerk of the Scales that his mount lost action just before the line.