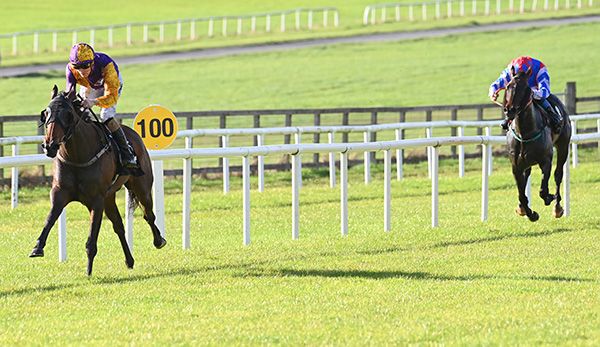 Bua opened her account in some style when cruising to success in the Barberstown Castle Fillies Maiden at the Curragh.

The Paddy Twomey-trained filly had been sixth on her debut at Dundalk nine days ago and took a significant step forward from that run.

Billy Lee cruised up to challenge two furlongs from home on the Ennistown Stud-owned daughter of Dark Angel.

She moved to the front a furlong-and-a-half out and streaked clear in the closing stages to post an easy 12-length success at odds of 5/2. 6/5 favourite Lizzy's Filly chased her home.

“I thought she was a very good two-year-old and she was very well entered up but she got an injury in the spring,” said Twomey.

“I thought she was our best two-year-old last year and we had some good ones last year.

“She had an injury that put her away for all of last year and we had a few little hiccups along the way this time but there was no questioning her ability at any stage.

“She's in the sales and we'll see. The owner is having a good run, he had a Group 3 winner at Leopardstown yesterday and I bought the dam for him so he's getting on well. He's a good man so it's great to see it.

“That'll be it now for her. She's had two quick runs and on the second run of her life to come to the Curragh and win a maiden by a long way is great.

“I think she's a smart filly and Billy said he thought she'd be good enough to contest group races next spring.”

The win moved Billy Lee back within one winner of Colin Keane in the title race.