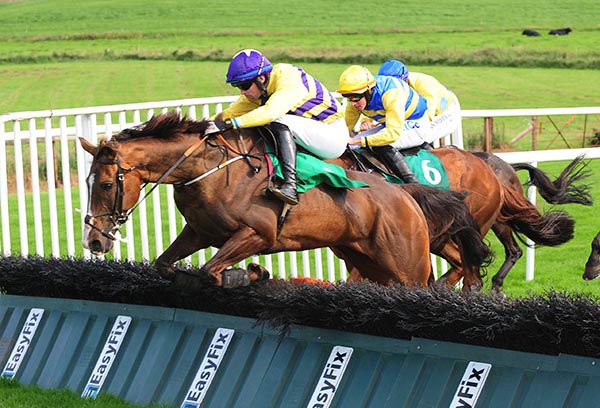 Already twice successful over fences this year, the Noel Kelly trained ten-year-old switched to the smaller obstacles at Sligo and kept on well to take minor honours.

Backed from 3/1 into 9/4 favouritism today, the bay gelding was settled in rear by Conor Orr, taking closer order from three out, where he wasn't fluent.

He travelled best and challenged after the next, soon getting to the front before battling on gamely under pressure to fend off the effort of King Of Aran by a length and three parts.

The runner-up was returned at 4/1 under Danny Mullins for Michael Grassick, while Caerleon Kate (12/1) was another three parts of a length away in third.

Kelly said afterwards: "They went too slow yesterday (in Sligo) and they didn't quicken.

"He's entered for Killarney later on in the week, but we'll see what he is like in a couple of days. He might run but I'd say it is a bigger chance he won't.

"Looking at it this morning you had to go for today's race - if he was a five-year-old horse you wouldn't do that but sure he is a 10-year-old horse.

"He could have finished third today as handy as winning.

"Conor (Orr) is a very good jockey - I gave him a lot of rides and he had no luck for me for a long time but I stuck by him."