Cautious Approach rewarded with the spoils 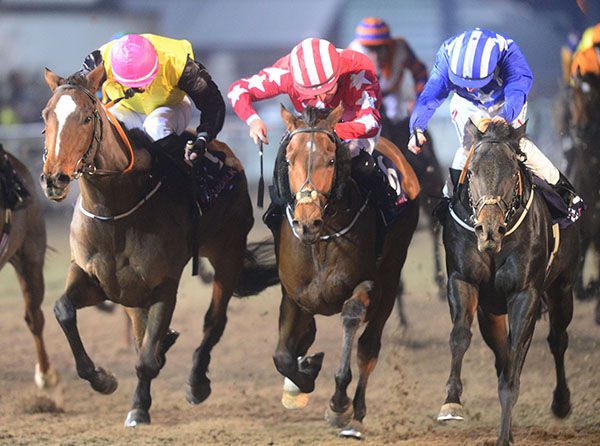 Favourite backers breathed a sigh of relief in the nightcap at Dundalk as Cautious Approach s late surge saw her win by the minimum margin.

Richard O'Brien's four-year-old filly thundered home in the second split of the extended mile and two handicap to pip a battling Cache Queen (9/2) and Colin Keane by a nose at 7/2. Pepperoni Pete (8/1) and Shane Foley were only a short head away in third, between the front two.

Jockey Ronan Whelan said: "She's a filly that probably saves her best for here, she enjoys the surface.

“Arguably stepping up in trip has brought about a little bit of improvement from her.

“She's tough and Richard has done a great job with her as she's run the whole way through the year but she's even saved her best for the end of it.

“I think once she settles that's a good trip for her and that's arguably her best run so far. Hopefully she's still a filly on the up.”

Cautious Approach was following up on a victory over a mile at this track three weeks ago. This was her first success beyond a mile. It was her third win on the Polytrack in addition to one on turf at Killarney.