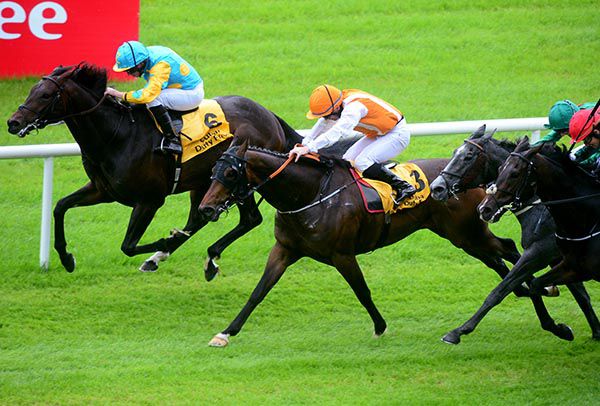 Insignia Of Rank lunged late to land the spoils in the Listed Celebration Stakes at the Curragh. Old Glory made a bold bid from the front in the mile contest on the round track but was pipped at the line by Joe Murphy's charge.

Gary Carroll got a good tune from the son of Epaulette inside the final furlong as he just had his head down at the right time to secure a short-head verdict on the line.

The 10/1 winner was recording his first stakes success having proven progressive in handicap company.

“Gary rode a fantastic race because I think the horse is best at a mile-and-two but he was in such rude form on Tuesday we decided to run,” said Murphy.

“We thought there would be a fast pace in the race and with €75,000 on offer we thought we'd take our chance.

“The only thing that worried me last night was the way Shekiba ran because she was working very well. I was a little bit disappointed with her last night but fillies can do that at times.

“This horse showed what he's doing at home and that's why we are here.

“He likes a box seat and has more gears than you think. He's versatile ground-wise, it's immaterial to him.

“We had Galway as the plan but that rules that out now. I suppose we'll have to stay Listed now or that calibre and take it from there.

“Don't be surprised if in a year's time you see him over hurdles as the owners love hurdle racing. I doubt it but we'll see as he's a very versatile horse.

“He's a horse that performs on the big day and they are the ones you want.”

Carroll added:- “I hit the line good and I was hopeful that I’d got up but it was hard to be confident. I got out late enough but it was just in time.

“I was drawn well in one and I was going to make the running but Ryan went a good gallop. I was travelling every step of the way and I was praying Chris Hayes’ horse would drop back so I could get out.

“I had six seconds last week so it was great to get the head in front.”