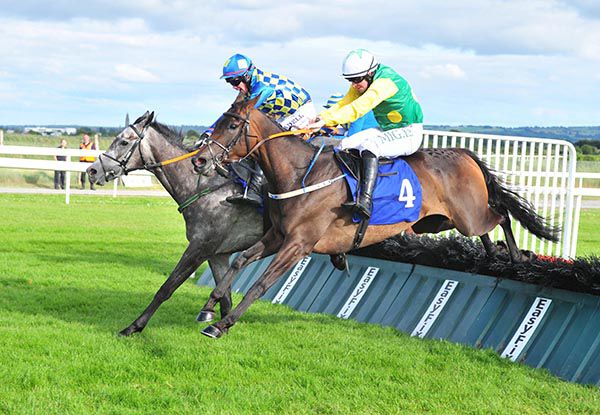 Chasing Abbey, near side, tackles Dunbar over the last
© Photo Healy Racing

The five-year-old gelding made rapid headway on the outer from eighth to be almost on terms entering the home straight.

He jumped the third last in pursuit of Dunbar with The Abbey also bang there on the inner.

Chasing Abbey came under the whip on the approach to the final hurdle and got to grips with Dunbar upon touching down on the run-in.

Trainer Paul Flynn said: “If I had ducks they would drown!

“They are all running well but something always seems to be happening. Here the last day a horse broke his leg near the line and Roachdale House was cruising there in the last (before unseating).

“This lad looked like he was never going to win and he's won so you don't know.

“He was very green. He jumps brilliant at home.

“I think he'll improve but he's just not a natural hurdler. He jumps great at home.

“I might try him in cheek-pieces, it's hard to put on after winning but it's only for jumping. He lacks that little bit of sharpness over jumps but it will comes.

“We might find a novice handicap somewhere. He might go for a novice as there would be less runners and he might learn a bit more but it's probably too good for him.

“He's had his wind done since the last day when he gurgled. He didn't do anything right then and jumped terrible over the wooden hurdles.

“He's used to them hurdles and jumps them better but he needs to get better with his jumping. At home you couldn't fault him.

“He's a nice little horse and his form in bumpers last year was steady.

“We all had a few quid on him. I had a double with the other lad so that would have been great!”

This was Chasing Abbey's first career success on his seventh start.