Cheltenham Foxhunters next for Ucello Conti 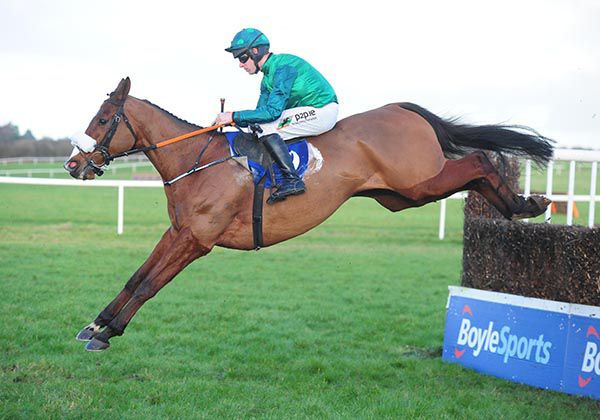 Ucello Conti booked his ticket for the Foxhunters at Cheltenham after landing the odds in the Arctic Tack Stud Hunters Chase at Thurles this afternoon.

However the uneasy 4/6 chance certainly didn’t have things all his own way and those who supported the favourite must have been a shade worried as Barry O’Neill got to work in pursuit of the front-running Gwencily Berbas between the final two fences.

Ucello Conti had just joined issue at the last where Aine O’Connor was unseated after Gwencily Berbas made a mistake.

This left the way clear for the Gordon Elliott-trained gelding to come home four and a half lengths clear. Samanntom took the runner-up berth, with Myrons just a neck further away in third.

This completed a great day for punters at Thurles with five favourites obliging.

Elliott said, "He'll be entered for the English National but we wanted to qualify him for the Foxhunters at Cheltenham so he'll go straight to Cheltenham now.

"There's still plenty of improvement in him. Barry said he landed on his hind legs at the second last and it took him a while to get going but he was confident he was going to win and was only getting into top gear again."

Ucello Conti is generally a 7/1 chance for the Foxhunters behind 6/1 favourite Stand Up And Fight.