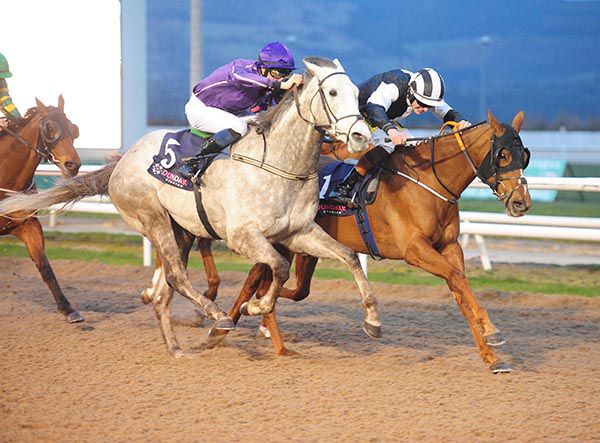 Ciao held the late charge of Waterboy to land the spoils for Champion Hurdle winning trainer Gavin Cromwell in the Ready Mixed Concrete Handicap at Dundalk.

Donagh O'Connor drove his mount into the lead over a furlong from home but she was strongly pressed by Waterboy in the closing stages.

The Lord Shanakill filly just held on at the line to secure a short-head victory at odds of 9/2.

She had won a maiden over course and distance in early January before finishing fourth on her handicap debut a fortnight later.

Assistant trainer Ger Fox said:- “We fancied her a bit today as she has been in great nick at home. We freshened her up after her last run.

“She was to run over a mile and a half last week but waited for this instead and claimed off her as she had plenty of weight.

“Espoir d”Allen came home on Wednesday. He’s in great nick and you wouldn’t know he’d had a run. Gavin is home tonight and then off again to Uttoxeter tomorrow with Raz De Maree in the Midlands National.

“He’s had a busy week but is on the crest of a wave and hopefully it keeps going.”