Cimeara takes the Noblesse on debut for O'Brien 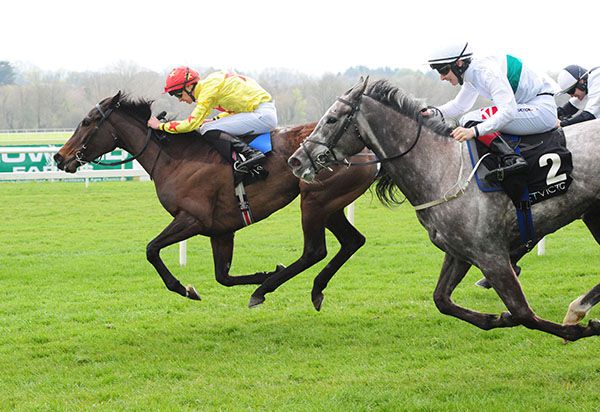 Cimeara landed the feature at Cork, the Listed BetVictor Bet 5 Get 30 Offer Irish EBF Noblesse Stakes, on what was her debut for Joseph O'Brien and owners Sun Bloodstock.

Successful at Group 3 and Listed level last season when trained by Jim Bolger, the daughter of Vocalised was then sold for E500,000 at the Goffs Champion Sale in September.

Sent off a 7/1 chance this afternoon, the bay four-year-old raced mainly in second under Donnacha O’Brien.

She was ridden to challenge over two furlongs out and soon gained a narrow lead, keeping on well in the closing stages to score by half a length. Who's Steph who was sent off the 11/8 favourite, ran on well to take second under Colin Keane for Ger Lyons, while the front-running Warnaq (7/1) was another half a length back in third with Robbie Colgan aboard this one for Matthew Smith.

The winning trainer said afterwards: "Obviously she was a good filly for Mr Bolger last season and it is nice to get the season off to the nice start with her. She stays well and her best form last year was at a mile and six and we'll step her up in trip now as the year goes on.

"We didn't expect her to win but she has done well with a penalty and the Vintage Crop Stakes at Navan is an option next. Her main objective this year is to win a Group 2 race as she has already won a Group 3.

"Donnacha was grand after his fall at Leopardstown yesterday. He was lucky he didn't get a kick or anything and he has plenty meat on his arse!"