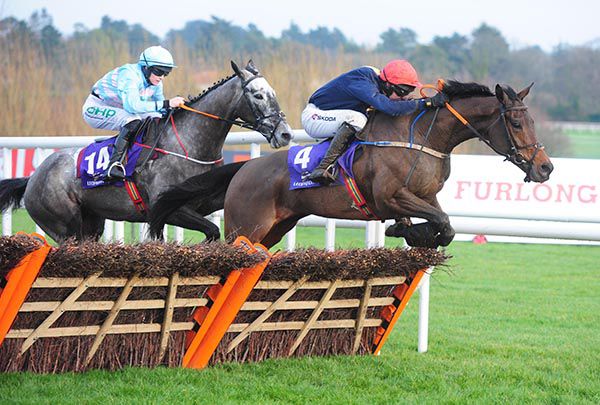 The Martin Brassil-trained gelding was one of many winners this year disqualified for a prohibited substance found in his post-race sample after landing a similar event at the Galway Festival.

The son of Court Cave has been absent since, and justified 15/8 favouritism when leading before the last to score by three lengths under Mark Walsh. Dallas Des Pictons took the runner-up spot, with Raya Time a further two and three quarter lengths adrift in third.

Brassil said, “It’s great to come back and show what he showed us at Galway. He’s a progressive type of horse and his ideal trip is probably further than two (miles).

“We’ll find out a bit more the next day when he runs in a winners’ race and see what level of ability he’s at.

“The ground was softer at Galway and his jumping really kept him in the race today. He was going as fast as he could down the back but when he came to the last there his stamina came into play.

“Sean and Bernardine (Mulryan) sponsor the Ballymore Novice Hurdle at Cheltenham and they would love to have a runner in it. Whether he’s good enough for that we’ll have to find out in the meantime.”

Paddy Power have introduced City Island at 50/1 for the Ballymore Novices Hurdle.