Clean sweep for the visitors in Dundalk feature 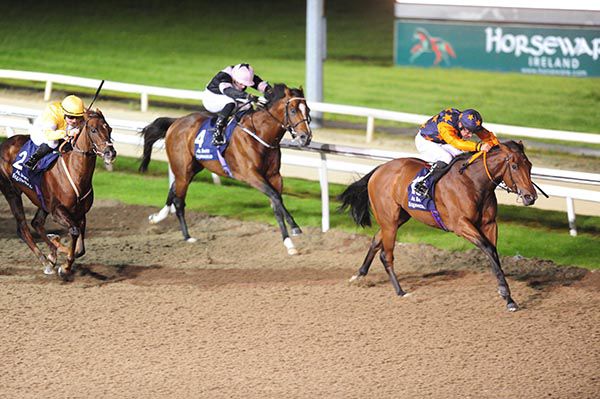 The Group Three Al Basti Equiworld Mercury Stakes at Dundalk lost some of its lustre with market-leader El Astronaute getting down in the stalls and escaping underneath. He was eventually caught and withdrawn and the sprint which went off eleven minutes late was taken by Dr Simpson

It was a clean sweep for the visitors as Tom Dascombe’s Dr Simpson (16/1) beat James Tate’s Dream Shot and Archie Watson’s Corinithia Knight.

The first two home are juveniles and Rory Cleary gave Dr Simpson a good always on the pace ride.

Dream Shot had to switch to get a run and he ended up three parts of a length off the filly, Dr Simpson.

It was a head to Corinthia Knight in third.

Big home hope Hit The Bid had no more to give from over a furlong out and he was ultimately a length and three parts back in fourth.

Jockey Jason Hart was said to have been briefly knocked out after the incident on El Astronaute.

“She's very straight-forward and simple. She hit the gates well, travelled good and strong all the way and picked up nice and smart,” said Cleary.

“Tom rang me before the race and told me she was straight-forward and to keep it simple. Hopefully it'll be the first of many rides for him.

“It's a chunky weight allowance and a great opportunity. She shows loads of pace and it's hard to peg them back with just 8-4 on their back, it's a big help.

“Hit The Bid is a speedy horse but he came off it before I did and I was confident that I had plenty there to get me all the way to the line.

“That's brilliant and thank-god it was 8-4 as I probably wouldn't have been riding otherwise.”

The Stewards informed John Quinn (GB) trainer, through his authorised representative, Paul Childs, that El Astronaute, would have to be recertified before being declared to run from stalls again.