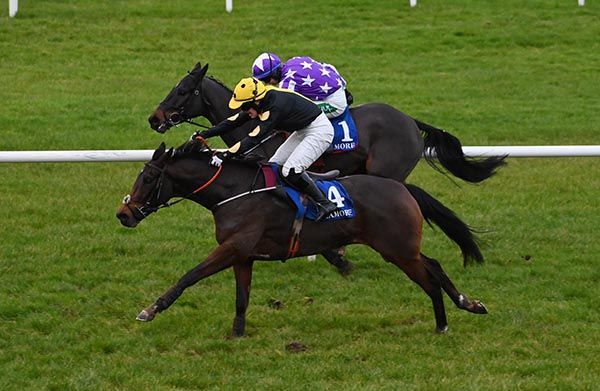 The winning rider, niece of trainer Ray Cody, had partnered four point-to-point winners but was recording her first 'track' victory.

She held her mount early in the two-miler before improving to dispute after about half a mile.

The Michelle Gannon-trained Westerner gelding fought it out with 2/1 favourite Cardamon Hill from the two furlong marker and got on top in the closing stages for a length-and-a-quarter win.

The 16/1 winner (as big as 50/1 this morning) was making his 'track' debut having had four runs in point-to-points. The most recent of those when fourth at Damma House last month.

The winning rider said: "I'm 21 and from Dunnamaggin in Kilkenny. Ray Cody is my uncle and Pat Cody is my father, he is assistant trainer to Kieran Purcell.

“I've had four point-to-point winners and I was mad to get one on the track. My mother Debbie (Cody nee Owens) rode a winner around Tramore as well and she beat Ruby Walsh!"

Michelle Gannon added: "He was as fit as a fiddle from running in point-to-points. He is an excellent jumper and is about 16.1hh. We were more hopeful than confident coming up against all the big boys. He is a Westerner and they love that ground. To ride him you'd know that he'd like the likes of Tramore.

"He is auld dinger, he is good and honest and that's half the battle. His wind is A1. I've had so many horses with wind issues that I'd take a horse with a leg instead! You have to get so many surgeries when they have a wind issue and then you might get the wrong type of surgery and it mightn't work, it's a disaster.

"I have about six or seven in at the moment, mostly point-to-pointers. I used to have a few more for the track but the money is in the point-to-point game. I've had point-to-point winners last season and I've sold them all and made a good few pounds on them.

"I'll leave it up to (owner) Padraig (Barry) now in regards what he wants to do. He was on the market when running in point-to-points. He might get a bit of crack out of him now and he actually bred him as well. His full-brother (Blue In The West) was third on debut at Ballindenisk last week."

Sent off at 30/100, Galopin Des Champs was strong on the run-in as he landed the odds in the Paddy Power Irish Gold Cup under Paul Townend.