Coen doubles up on Shamad 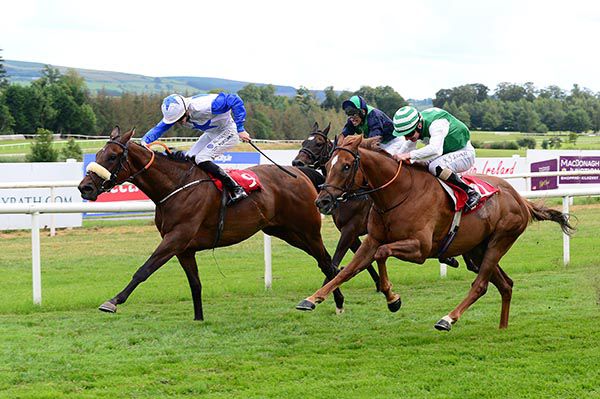 Ben Coen completed a double at Gowran Park this afternoon when giving Shamad a powerful drive to take the Byrne Marquees Handicap.

The Peter Fahey-trained gelding has been generally consistent this year but put a disappointing effort at Navan a fortnight ago behind him to get off the mark at the 22nd attempt.

The 10/1 shot made headway between horses to lead under two furlongs out, and was driven right out to hold off Pillmakers Hill by a head. Aera also came home strongly to finish just three quarters of a length away in third.

Coen was earlier on the mark when Travelwise justified 13/8 favouritism in division one of the apprentice handicap.

Fahey said, “I'm delighted to win with him for Fergal (O'Neill) who is the main man in Direct Bloodstock.

“I bought him over in Newmarket and he came down to the yard and took the horse off me. He has a lot of horses in training but it's his first winner in Ireland today. He had a winner a couple of weeks ago with Dan Skelton.

“He'll tip away during the summer and he has a nice mark over hurdles. He'll mix it after a while. He's been plenty busy but he goes on nice ground. He's a fine looking horse and he's actually a great jumper.