Colours back in winners enclosure in Dash 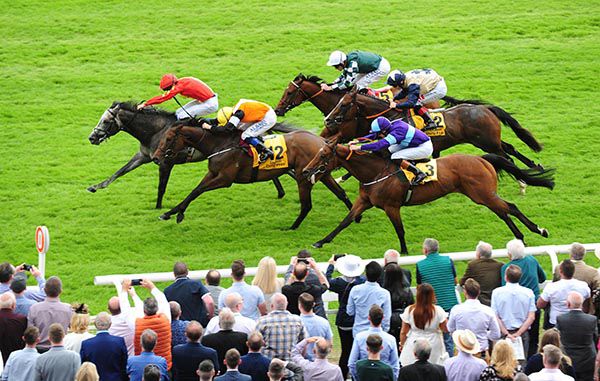 Speak In Colours got back to winning ways when dropping in grade in the Dubai Duty Free Tennis Championship Dash Stakes at the Curragh this afternoon.

The Joseph O'Brien-trained colt was turning out again quickly having been a fine fourth behind Blue Point in the Diamond Jubilee Stakes at Royal Ascot last Saturday.

Sent off the 11/8 favourite for the six-furlong contest he was produced to lead over a furlong from home by Donnacha O'Brien.

The son of Excelebration stuck on well in the closing stages, drifting slightly right close home, to record a head victory over Woody Creek

There was a stewards enquiry called, with eventual fifth Beckford in particular meeting traffic problems, but the result stood.

“It was a big enough ask to come back. This time last week he still hadn't run at Ascot and he ran a huge race there,” said O'Brien.

“Donnacha said he jumped and travelled well. He said he moved on him and he thought he was going to go and win well but just in the last 100 yards he's flattened out a bit on him.

“It was a big run out of him and it was nice prize-money. He'll have a little freshen up now.

“We've no immediate plans. He has plenty of entries and options. It was nice to get him back winning and now we can come back up in class.

“The Lennox Stakes is worth a lot of money in Goodwood, that's seven, and then he has a couple of sprints that he has options in.”

It was a third winner at the Derby festival meeting for owner Chantal Regalado Gonzalez with Iridessa striking in the Group 1 Pretty Polly yesterday and War Diary winning the Ragusa Handicap for John Murphy on Thursday.