Connell gets his Leopardstown winner with Speaker Connolly 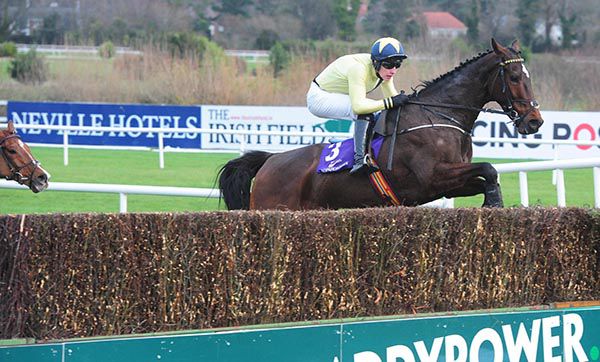 Starting off in handicap chase company, the winner, a mere five-year-old, is handled for Connell by Alan Fleming on the Curragh.

In form Henry de Bromhead again saw his horses run right up to scratch with his pair Poker Party (6/1) and Surf Instructor (10s into 8s) filling the second and third positions.

However Speaker Connolly proved strongest from before the last to prevail by five lengths and fourteen lengths.

“That was great. He jumped a bit poorly the last day, he's taken a while to get going with his jumping, but he's put it together now,” said Fleming.

“He's probably a horse that will get a bit further and I'd say he'll improve again from that today so hopefully he will. He'll need to because the handicapper's going to give him a right whopping.

“Where we go next I don't know but hopefully there'll be another nice handicap in him anyway.

“I was a little worried about the ground, I thought it was a bit good for him today, but he handled it lovely.

“He's won on heavy in Wexford so his form would have suggested he wanted it soft but he's done it very well today.

“He maybe ran a bit patchy but I'd say over three miles he'd probably run on the bridle the whole way. I think he's nice and I was very happy with the way he jumped.

“If he can improve at all we'll have an alright horse on our hands.”

On the loss of Borderline Chatho:- “It was tough yesterday to lose him. He was a nice horse and it'll be hard to fill his box. Unfortunately these things happen.”