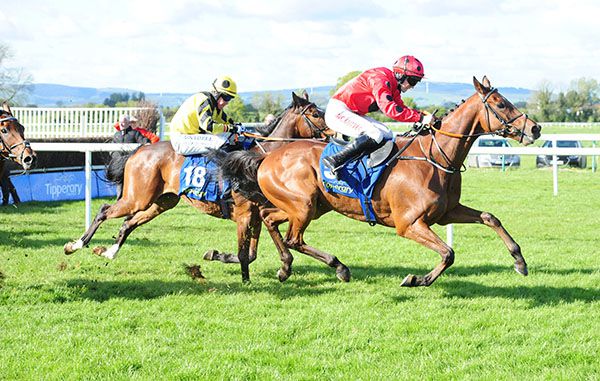 The Gavin Cromwell trained Cray landed a gamble in the first divide of the Ryans Cleaning Event Specialists Handicap Hurdle.

A dual winner on the level when trained in the UK, the son of Rip Van Winkle was bought by current connections for 16,000 guineas last October.

A well-beaten ninth of twelve on his handicap debut over flights at Downpatrick last month, the bay five-year-old was available at 16/1 in a place this morning.

However the money really came for him on-course, touching 11s, before going off the 5/1 favourite in the colours of owner Colman Smith.

Settled in mid-division by Jonathan Moore, he was pushed along from three out and made good progress to lead after the next.

An awkward jump at the last did little to stop his momentum, as he went on to score easily by three lengths. Too Much To Ask (20/1) filled the runner-up spot under Roger Quinlan for Julie Cashin, while Churchtown Glen (8/1) and Divin Desir (33/1) were third and fourth respectively.

Cromwell said afterwards: "He started coming to himself in the last few weeks and I did fancy him today. He is in again at Cork on Saturday and he will probably run again if he is alright.

"He didn't travel anywhere there and three miles shouldn't be a problem to him."

D.E. Mullins, rider of Pivotal Flame trained by W.J.Lanigan, reported to the Clerk of Scales that his mount felt lame after the third last hurdle and was pulled up.

The Stewards enquired into possible interference near the finish involving Fu's Island ridden by K.J. Brouder, placed fifth and Divin Desir (FR), ridden by A.W. Short, placed fourth, where it appeared that Fu's Island clipped a heel and stumbled. Evidence was heard from the riders concerned. Having viewed the recording of the race and considered the evidence, the Stewards made no alteration to the Judges placings. They did, however, advise both K.J. Brouder and A.W. Short to ride with more care.