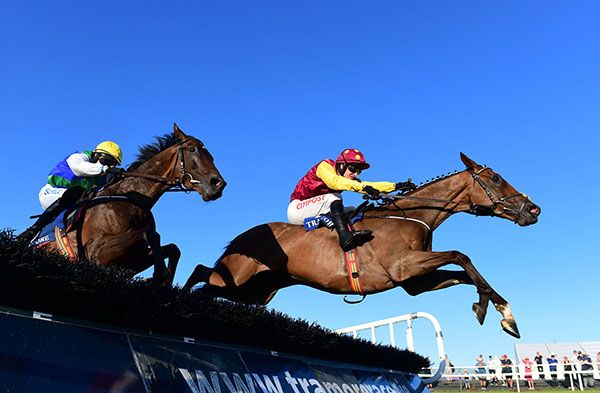 After winning the fourth on Vischio Danny Mullins quickly doubled-up aboard Rotten Row for his father Tony in the O'Neill's Bar Rated Novice Hurdle, with the brace coming in at just over 111/1.

Successful in a bumper on debut when trained by Joseph O'Brien, the five-year-old had been ultimately disappointing since and was sent off the outsider of the field this evening at 25/1.

Settled in mid-division on the inner, he was switched to the outer to challenge approaching the second last and was ridden to the front before the final flight.

He extended his advantage on run-in, coming home two-and-a-half lengths to the good from Evenwood Sonofagun (11/2) in second. Minella Youngy was sent off the 11/8 favourite and he finished fourth, with just six lengths covering the field at the line.

"He was the outsider of the field because something happened to him at the third last at Limerick the last day," the winning handler revealed.

"He clipped his foot or something. Danny thought he had got lame and went to go pull him up but then he felt him sound. Something happened, he hit himself some way. He went to go change his legs going into the third last and put himself wrong.

"He won a bumper first time out for Joseph O'Brien. He won't be going to Cheltenham or anything but he'll win again.

"He is own by a local man (Roger O'Byrne) and it's huge for him to win here."

The Stewards requested a report from Anthony Mullins, trainer, as to the apparent improvement in form of Rotten Row, placed first, as compared with its recent run at Limerick on July 21st, when finishing last of 13 runners and was beaten by 66 lengths. The trainer reported that his charge had disappointed on its previous run when loosing its action travelling down the hill which was reported to the Stewards on the day. Having considered the evidence the Stewards noted the content of the report.