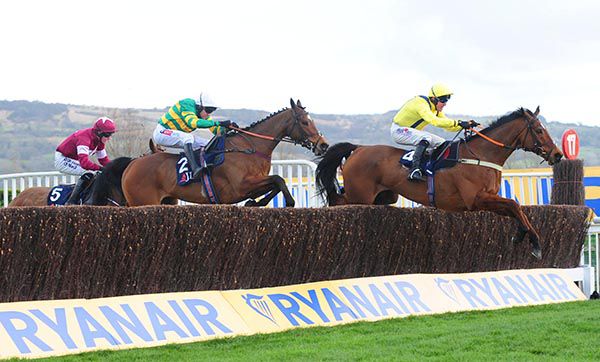 Defi Du Seuil got the better of old rival Lostintranslation to claim the JLT Novices’ Chase at Cheltenham.

Colin Tizzard’s Lostintranslation came out on top when the pair crossed swords in the Dipper Novices’ Chase over this course and distance on New Year’s Day, but the Philip Hobbs-trained Defi Du Seuil turned the tables at Sandown last month.

Defi Du Seuil was the narrow favourite at 3-1 to confirm his superiority in the first race on day three of the Festival, and ultimately did so comfortably in the hands of Barry Geraghty.

Robbie Power appeared keen to make it a test of stamina from the outset on Lostintranslation, forcing the pace from a long way out.

However, Defi Du Seuil was travelling the better at the top of the home straight and following a thrilling battle on the run-in, it was the JP McManus-owned six-year-old who won the argument by two and a quarter lengths — his second Festival success having won the Triumph Hurdle in 2017.

Hobbs said: “He has been phenomenal and our flagship horse for a bit now. He is the most amazing horse, as he is so tough, loves the job and is so sound. It’s just great.

“He only ran twice last year. He was fourth at Ascot, which wasn’t a disaster, then he went to Ireland and ran below form, so he stayed in Ireland (at McManus’ Martinstown Stud), plus our horses weren’t A1, so it was best to draw a line through last season.

“JP just said, ‘you know when you won this race, last February when you sent him home’, and I said, ‘No, you told me he was going home!’.

“I still think, and nobody else agrees with me except for John Francome, that it was the sun that was the problem the first day he came here, as he ballooned everything going into it but coming away from it he was fine.

“OK, it didn’t affect the other runners, but it affected him.

“Barry thinks he could win at any trip, but he is probably best at two and a half. I would have thought we would train him for the Ryanair next season, but that is a long way off.”

Tizzard was proud of the runner-up and said: “It was a fantastic run, he did nothing wrong, jumped well — it was just his old rival was just tanking in behind us all the time and was faster from the second-last.

“There’s not that much between them, but a length or two is enough. We’ll probably go up in trip next year, he’s a Gold Cup horse of the future.

“He’s a gorgeous young horse who has done everything this year, but I can’t take anything away from the winner. He’s beaten the rest out of sight, so you can’t be anything but pleased.

“He’s only a novice once and they do do Aintree and Punchestown, so I’d imagine he’ll do one or the other — or maybe even both!

“Horse welfare is everything, but as long as he’s fit and well we don’t need to put him away yet.”