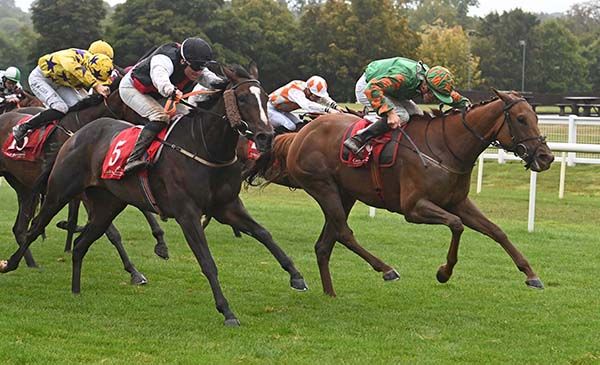 Born Invincible completed a double at Cork for Ger O'Leary, as she claimed the concluding Mallow Handicap.

O'Leary was earlier on the mark with Pretty Rebel and coincidentally the same two horses also provided the Curragh based trainer with his only previous double at Naas in July.

A confirmed soft ground specialist, Born Invincible was sent off the 7/2 favourite under Dylan Browne McMonagle.

Settled towards rear in the middle of the track, the daughter of Born To Sea took closer order from halfway and was ridden in pursuit of the leader with over a furlong to race.

She got to the front inside the final 100 yards and kept on strongly to score by a length.

Slightly slow into stride, Rose Of Malta (10/1) soon got to the front and try as she might, she couldn't hold off the winner in the closing stages, ultimately having to settle for second under Seamie Heffernan. Miracles In May (10/1) was half-a-length back in third, while Golden Days (10/1) completed the places a neck away in fourth.

"It was the same two horses again, Pretty Rebel and Born Invincible and again the ground was the key," O'Leary explained.

"It was a lovely polished ride from Dylan. I thought he had left it a bit late but he timed it to perfection. Earlier I thought Sean Dalton (winning owner) wasn't here but he is actually here.

"I'd like to pay tribute to Adrian Joyce who started off this filly and sourced her for Sean. He has brought her through her career and is the man responsible for her winning today.

"It's fantastic and everything is going well, thanks be to God.

"I've been threatening to have a drink with Sean for a long time, he's with us three years, and I'd say tonight is the night!"

Run For Pat delivers under McGivern