Derby trial next for Leopardstown first time out winner Buckhurst 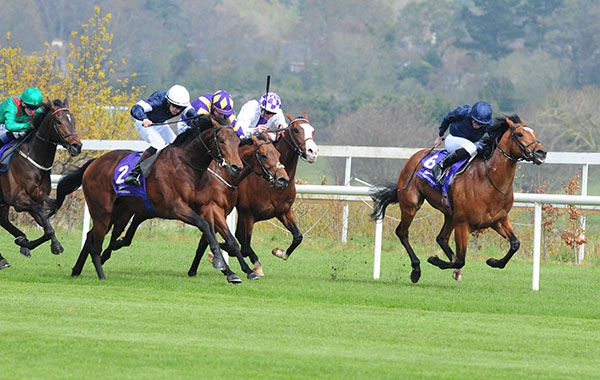 Joseph O’Brien picked the pocket of his father Aidan in the opening Leopardstown ‘Summer Sizzler’ Maiden. The Carriganog Racing newcomer Buckhurst (4s into 7/2) got there at the line to prevail under Donnacha O’Brien.

With Lancaster House a non-runner Ryan Moore switched on to Jack Yeats and he was popular in the betting, halving in price from 8/1 into 4/1.

This Galileo colt tried to get it done from the front for Aidan O’Brien but he couldn’t ultimately cope with the finishing burst of Buckhurst. Just a nose split them.

Buckhurst is a son of Australia, owned by Lloyd Williams. Of course himself and Joseph O’Brien enjoyed a never to be forgotten day when Rekindling won the 2017 Melbourne Cup.

“He's a very nice horse. I was a little bit surprised that he won at a mile first time, off a slow pace,” said O'Brien.

“Donnacha was very happy with him. I'd imagine we'll probably step into a Derby trial now and go from there.

“I was very impressed with him, the horse in front got the run of the race and there was strong word for a couple of others in the race.

“He's well bred, he's related to The Gurkha and obviously he's by Australia.”