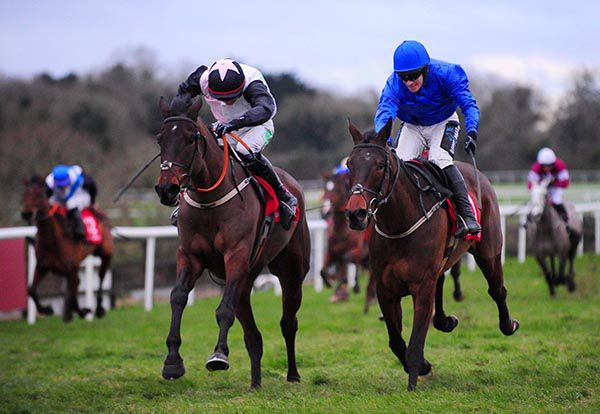 The James Motherway-trained Dinny Lacey proved tough to claim the concluding bumper at Punchestown this afternnoon.

Having been third on his debut in a Limerick bumper over Christmas the Presenting gelding stepped forward nicely to open his account.

Dinny Lacey, under a strong drive from Declan Lavery, showed a great attitude to keep his head in front and repel 20/1 shot Fire Away by half a length. Battle Of Midway was just a short-head back in third.

Motherway said afterwards:- “We always thought a fair bit of this fellow and he showed us plenty from day one. He’d a nice run in Limerick at Christmas, and they went a better gallop today which suited us.

“I walked the track today and said will I or won’t I (run him) but it walked safe and being by Presenting he points his toe a bit. I loved the way he found plenty when he came off it. I thought a furlong down they were going to get to us but Deckie said he kept pulling out.

“It’s a nice horse for Brian (Acheson) and Robcour. They have a good few horses with us, so hopefully he’ll go on.

“It’s possible he could run again this season as he took his run well at Christmas. We’ll let the dust settle for a month or six weeks and see then. He’s a big stamp of a horse and hopefully a chaser in the making.”