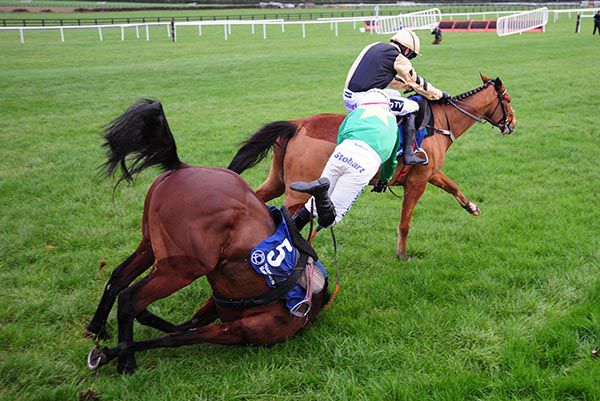 Paul Nolan believes both Discorama and Latest Exhibition deserve a place at the Cheltenham Festival after running at Naas on Sunday.

Discorama looked set to fight out the finish of the Grade Three novice chase with the Willie Mullins-trained Ballyward until crashing out at the final fence under Bryan Cooper.

Nolan reports his charge to be none the worse and feels there was enough promise in his performance to merit a trip across the Irish Sea in March.

“Thankfully he seems 100 per cent. I was dreading going to see him an hour after the race as it was a bad enough fall, but he seems absolutely perfect — he’s not stiff in his neck or his back or anything,” said the Enniscorthy-based trainer.

“Bryan was only rowing on him and he’s a horse that stays well. We’ll never know what would have happened, but that’s the game we’re in — the fences are there to be jumped.

“I think we’ll be looking to bring him across to Cheltenham. I don’t know what the handicapper will do, but he’ll be entered in the novice handicap chase and he’s in the RSA and the four-miler (National Hunt Chase).

“I’ll speak to his owners and see where we go. He’s owned by Thomas Friel along with Andrew Gemmell, who also owns Paisley Park.”

Nolan enjoyed better luck later in the afternoon as Latest Exhibition confirmed the promise of his runner-up finish on his Limerick debut when running out an impressive winner of the concluding bumper.

Nolan added: “He was very good. He’s a big, strong horse and I’d say he’ll come on again for that run.

“We’re not going to go novice hurdling with him at this stage of the season. We’ll stick to the level and he’ll get an entry in the Champion Bumper.

“Hopefully we’ll go to Cheltenham with him. He’s a six-year-old now and stays well, so it’s worth a go.

“We’d be going to Cheltenham anyway, but it’s nice to take a couple of horses with you.”

Nolan also revealed time has been called on the racing career of high-class mare Meri Devie.

Formerly trained by Mullins, the six-year-old made a winning debut for her new connections at Naas earlier in the month, but was no match for former stablemate Camelia De Cotte when stepped up to Grade Two level at Thurles recently.

Nolan said: “She has gone for breeding now. It was nice to win a beginners’ chase with her as it means she’s won on the Flat, over hurdles and over fences.