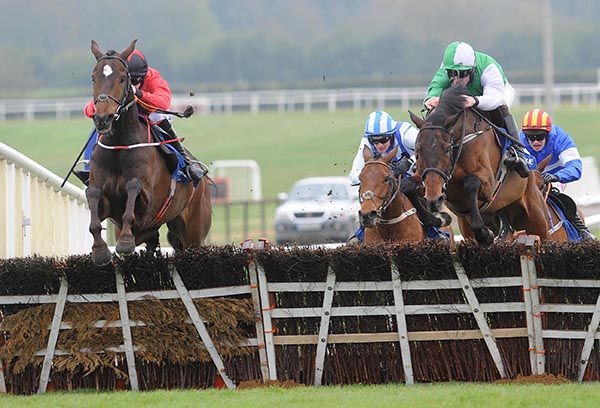 Pulled up in a point-to-point when trained by John Bleahen, the French bred son of Magadan was third on his racecourse debut at Down Royal in January.

He was since beaten by just a nose at Leopardstown last month, and stepping up in class today he was sent off a 33/1 chance.

Never far off the pace under Rachael Blackmore, he improved to the front entering the straight and battled gamely under pressure to see off the challenge of Zero Ten and Easy Game by three parts of a length and a neck.

The runner-up was sent off a well-backed 5/4 favourite (from 7/4) under David Mullins for his cousin Emmet, while Easy Game was returned a 9/2 chance.

de Bromhead said afterwards: "I'm delighted for Hugh (Bleahen, owner). He's been a great supporter of ours and obviously we bought Sizing Europe and Sizing John from him and have had a lot of luck with him over the years.

"He kept this lad after the store sales and has always liked him. He’s developing all the time, and has progressed a lot from each run.

"He had a nice run the last day in Leopardstown and looked a tad unlucky not to win. He's very tough and it was a brilliant ride from Rachael as usual.

"I'd think we’ll have to go to Punchestown, and we can have a look at the two mile four and the three mile Grade 1's. We'll see how he comes out of this race first, and he'll go chasing next season."