Drop in trip works oracle for One Cool Poet 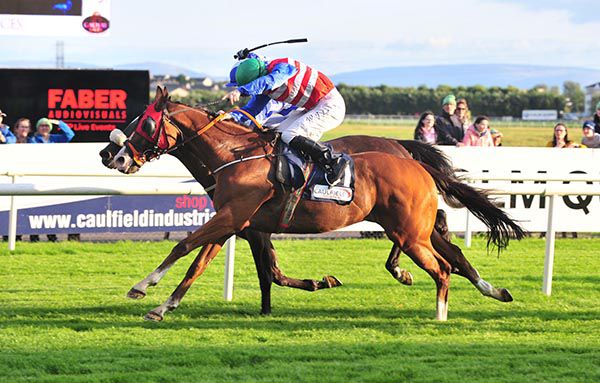 One Cool Poet, near side, gets the better of Emphatic
© Photo Healy Racing

Strong-travelling One Cool Poet had his day in the sun in the Caulfield Industrial Handicap over an extended mile at Galway.

The seven-year-old gelding began to cut through the field from rear of mid-division approaching the final two furlongs.

He swept into contention rounding the home bend and arrived on the bridle upsides the leader Emphatic passing the furlong pole.

He was ridden by Billy Lee in the final 100 yards and got up a neck in the closing stages at 7/1.

Emphatic was a 25/1 shot with Sharp Focus (8/1) and Wild Shot completing the places in third and fourth respectively.

Billy Lee said: "He (Matthew Smith) said whatever way I can ride him but 'don't get there until the last 50 (yards)!'

"I even got there too soon!

"In fairness when he stuck his head in front he was just doing enough. He's a clever old boy, but thank God he won."

Matthew Smith added: "At long last! In the last year he has been second or third nine or ten times but today was the day to do it.

"Over one mile four furlongs he is travelling too well and tends to stop in front when the other horses aren't carrying him.

"He travelled incredibly well again today and Bill (Lee) said he has some gears. It was a little bit of an unknown running him over a mile and half a furlong today but it worked out well and had no problem today.

"He has a couple of entries later in the week and will run again.

"I'm delighted for Ollie Ryan, from Tullamore, who is the main man in the syndicate and has been very good to me in the last couple of years."