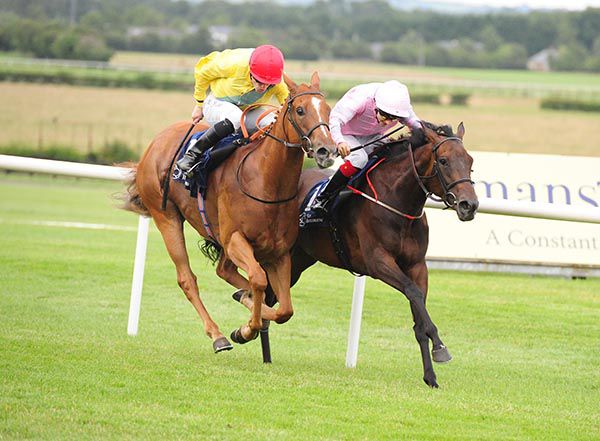 Drumquina became the seventh winner out of 1998 Irish 1,000 Guineas heroine Tarascon when making all from stall one in the Tom Jones Memorial Maiden at Naas.

Andy Slattery’s mount appeared to be briefly headed inside the final furlong by the favourite Castletownshend but battled on well to outpoint that one by a short head. She was returned 4/1, with Castletownshend (2/1fav) a close second and Sacchoandvanzetti (5/1) a further two and a quarter lengths away in third.

The winner had finished third here earlier in the month, and with her rider’s claim and fillies’ allowance, didn’t have all that much to find with the higher rated placed horses.

The absent winning trainer Fozzy Stack commented by phone : "That's the last filly out of the mare. I'm delighted to have a winner for Jane (Rowlinson) who has been a great supporter of the yard."

Winning rider Andrew Slattery said : “I had a little moment of worry a furlong down. Billy (Lee) came to me and all she has done is grinded and grinded. I’m happy that she’s broken her maiden.

“She’s a tough hardy filly. Her mother is a champion so hopefully there is more to come from her.”