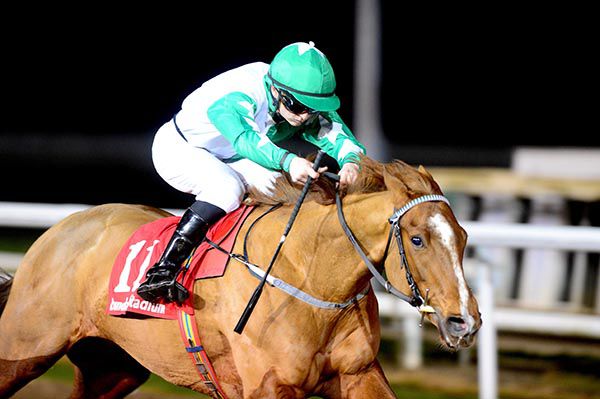 That's Not Me
© Photo Healy Racing

Dundalk’s last meeting of the year will get under way early, with a chance for That’s Not Me to follow up last month’s maiden victory at the course.

Tonight's fare, starting at 4.30pm and concluding at 8pm on this occasion, provides the opportunity for That’s Not Me in the opening Irish Stallion Farms EBF Race.

The daughter of Dandy Man, trained by Anthony McCann, drops back a furlong to the minimum trip — but she has previous form at five furlongs.

She appears to have most to fear from the Ger Lyons-trained newcomer Fairy Fast a daughter of Requinto whose dam is a half-sister to German Group Two winner Royal Power.

Fairy Fast’s jockey Colin Keane is on board Sky Seven in the Irish Stallion Farms EBF Maiden, and Michael Halford’s colt has strong claims — having run a cracker when narrowly beaten at the track three weeks ago.

The son of Helmet should benefit from that run, and could prove too strong for 68-rated Dare To Flare

The most valuable event on the card is the 25,000 euro Leading Jockey/Trainer Awards 2018 Handicap — in which War Hero may be able to finish the year in style for his trainer Patrick Prendergast.

Prendergast made the breakthrough at Group One level in the Moyglare Stud Stakes in September, and War Hero is already a course-and-distance winner who ran well here again when third on Wednesday.

In-form trainer David Marnane sends out Koybig who goes in search of a fifth course win on his stable debut.

Marnane won the Royal Hunt Cup at Royal Ascot this year with Settle For Red, and Koybig is probably one to watch in the coming weeks.

He makes his reappearance after a 119-day break, however, and has yet to win over this trip.