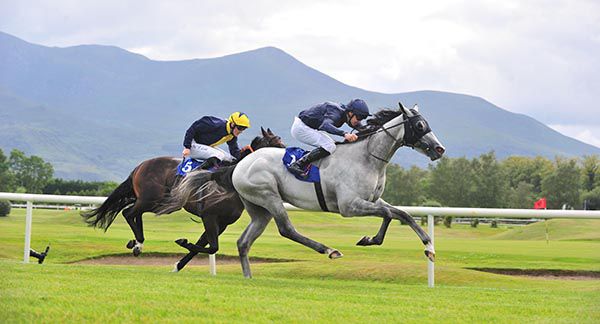 Dunkirk Harbour was the ready victor of the Irish Stallion Farms EBF Race under Donnacha O'Brien in Killarney.

The 9/4 favourite was easy-to-back having been 6/5 in the morning.

The grey son of Declaration Of War tracked Rhydwyn in this extended mile contest and travelled well into the lead with less than a quarter of a mile to travel.

He was ridden to assert inside the final furlong and forged on to draw two and a half lengths clear at the line for Aidan O'Brien.

Rhydwyn could make no impression in second at 3/1. He was half a length in front of fast-finishing Hillwalker at 20/1.

Donnacha O'Brien said: "He wasn't doing a lot in front but he was rated to win the race and I had a grand position on him, and he quickened up and put it to bed early."

The Stewards interviewed M.C. Hussey, rider of Hillwalker (GB), concerning his use of the whip in the latter stages of this race. Evidence was heard from the rider concerned. Having viewed a recording of the race and considered the evidence the Stewards were of the opinion that M.C. Hussey was in breach of R10(3)(g) by using his whip with excessive frequency and R10(3)(i) by using his whip without allowing his mount at least three strides to respond. Having taken his previous record into consideration, the Stewards suspended M.C. Hussey for one race day.