Dyck out to do Derby double 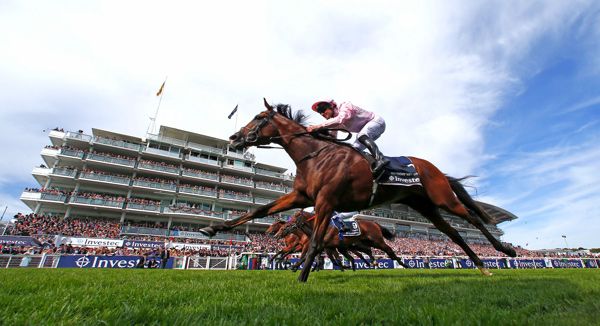 Anthony Van Dyck will be following in some illustrious hoofprints if he can complete a Derby double at the Curragh.

Having provided Aidan O’Brien with a seventh victory in the Investec Derby at Epsom four weeks ago, the youngster will bid to become the fifth Ballydoyle inmate to follow up in the Irish equivalent on Saturday — after his sire Galileo (2001), High Chaparral (2002), Camelot (2012) and Australia (2014).

O’Brien said of Ryan Moore’s mount: “Everything seems fine with Anthony — everything has gone well since Epsom.

“All the horses seem to have come out of it well. Epsom wouldn’t be as tough a mile and a half as the Curragh, but you still have to get it.

“The Curragh doesn’t have the ups and downs of Epsom — it’s very fair, probably the fairest mile and a half in the world, I would say — and the surface is unbelievable. The Curragh is more open and fair, and Epsom can be more tactical and can be tough.”

O’Brien feels this year’s renewal of the Epsom showpiece was particularly strong, having since saddled the third home Japan and the sixth Circus Maximus to win major prizes at Royal Ascot.

With that in mind, the County Tipperary maestro is particularly respectful of the threat posed by the Epsom runner-up Madhmoon — trained by the soon-to-be 87-year-old Kevin Prendergast.

“I think it was a very good Derby (at Epsom). You hear people talk before they are run — but they were all there from the trials, including Kevin’s horse from the Guineas,” O’Brien added.

“Only two horses have run from the race, and we’ve seen what’s happened — they’ve both won, so I’d say it was a very good Derby.

“Epsom is the first time all the three-year-olds come together, and it’s a very tough track, but when you get to the Curragh there’s usually no excuses. There’s no race in Ireland like the Irish Derby.”

Madhmoon will be bidding to make it third time lucky in Classic company, having finished fourth in the 2000 Guineas at Newmarket before getting within half a length of Anthony Van Dyck on the Surrey Downs — and Prendergast is relishing the rematch.

He said: “Madhmoon couldn’t be better and he’s running against the same horses he ran against at Epsom. If he has a bit of luck on his side, he could get the nod.

“I’m not going to say he’s better than he was at Epsom — but if he’s as good, he should run a good race.

“Whatever way the race is run won’t affect our horse.

“I just hope it happens — and I’d be very happy if it does.”

Chris Hayes has been ever-present in the saddle during Madhmoon’s five-race career to date and feels his big-race mount could be even better than he was a month ago.

“I’ve sat on him a couple of times since Epsom — and as crazy as it sounds, I think he’s improved,” said the jockey.

“He’s still relatively inexperienced and unexposed, so he is open to improvement and hopefully we’ll see that.

“Winning the Irish Derby will mean a lot, but the Epsom Derby would have meant as much — because that would have been nice to do it for the boss.

“We’ll take the Irish one if we can get it.”

Madhmoon is one of two runners for Sheikh Hamdan Al Maktoum, along with the Dermot Weld-trained Rakan

Weld trained the last horse to complete the Epsom-Curragh double in Harzand (2016) and hopes Rakan can make his presence felt, having beaten subsequent Royal Ascot runner-up Barbados in the King George V Cup at Leopardstown on his latest appearance.

“I’m happy with the horse, and he’s all set,” said the master of Rosewell House.

“In his stakes win last time out he beat Barbados, who went on to be beaten half a length in a Group Two race at Royal Ascot, so it was very respectable.

“He’ll come on from the run the last day, and I expect him to run a good race.”

The field is completed by recent Silver Stakes winner Guaranteed who bids to provide trainer Jim Bolger with a third Irish Derby success following the triumphs of St Jovite (1992) and Trading Leather (2013).

Bolger’s stable jockey and son-in-law, Kevin Manning, said: “He needs to step forward, but he is stepping up to a mile and a half for the first time.

“We’ve always thought a bit of the horse and we’re just hoping the step up to a mile and a half will bring out a bit more in him.

“I loved the way Kevin’s horse (Madhmoon) went to the line at Epsom — and I think whatever beats him will win.”