Elliott takes the bumper to make it a five-timer 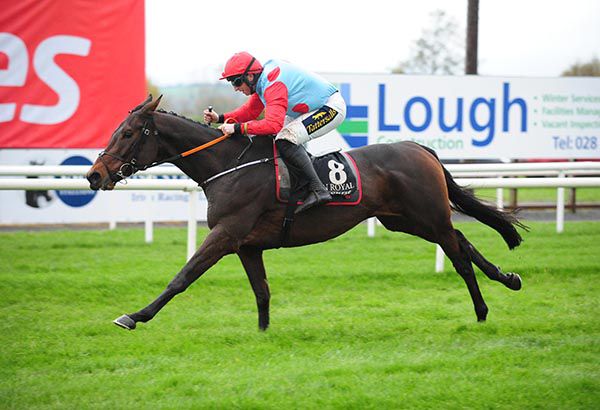 When asked on television after one of his earlier winners why he was running his bumper newcomer Pencilfulloflead in a winners’ race rather than a maiden bumper, Gordon Elliott gave the succinct response “because he’s a good horse, he’s well up to it”.

Strong in the betting all day for the Jumping For Joy On Racing TV INH Flat Race, the Shantou gelding hardened further on course from 13/8 to 6/5 favourite and came through under Jamie Codd to lead over a furlong out and clear away for a four and a quarter length win from Galway winner Hollow Sound (9/2). Legacy Thor (10/1) was another four lengths away in third.

It made five winners on the day for Elliott, who commented: "We knew coming up here it was a big day. It could be one of those days where we could have five winners or one winner - thankfully everything worked out great, we had five winners and two seconds.

"Simon McGonagle, my head man, owns the last horse (Pencilfulloflead) so it is very important for him. He gave a good few quid for him a year and a half ago/two years ago at the Sales. He pulled muscles last year and we didn't get to run him.

"He's a nice horse. The plan was to come here and go to Cheltenham Sales next week with him. He's a horse I would be fairly keen to keep in the yard, so I'm going to try and get someone to buy him as I think he has a big engine.

"I was glad the rain came last night, Jamie (Codd) said he would even like softer ground. He's bred to stay. He stayed well and there was five winner in it so it was a good performance.

"We thought he was very, very smart last year. He pulled a muscle at the wrong time so we just pulled the plug with him.

"It's great as Simon is probably with me since the second year I started training. He's a big part of the team and he is one of my best friends. We've been hanging around since we were 12 or 13 years of age and it is nice for him to get a winner like that.

"He's a staying chaser, he's really a horse for next year to go hurdling. Anything else is a bonus with him."