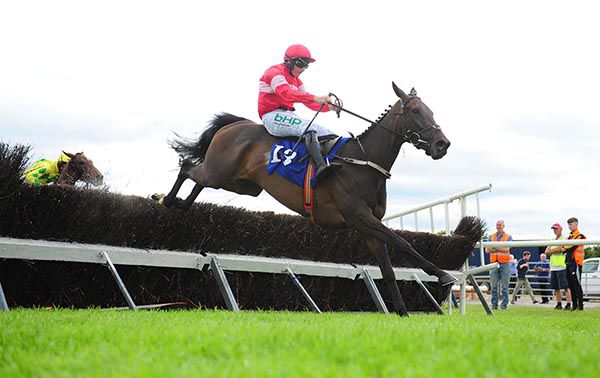 Eoline Jolie Willie Mullins' sole runner on the card, made a winning start over fences in the Roscommon Racecourse Beginners Chase over an extended two miles five furlongs.

The five-year-old mare was last seen finishing down the field in a valuable handicap hurdle in Ballinrobe at the end of May, but relished the task this evening.

The 11/4 favourite took over from Shimmer And Shine at the second last and moved clear coming to the final fence.

She negotiated that obstacle well and stayed on to score by two and a half lengths. Darling Miss (9/1) kept on for second, a length and a quarter in front of Isle Of Destiny at 9/2.

Jockey Paul Townend said: “She jumped like a buck and they've done a beautiful job on the ground in fairness to them.

“She was probably at her limits over hurdles and now that she can jump a fence it opens a few more avenues to her.

“It will do her no harm to get her head in front either.”

Eoline Jolie reached a peak of 121 over hurdles without getting her head in front in Ireland. She did win over the smaller obstacles in her native France, though, back in October 2017.