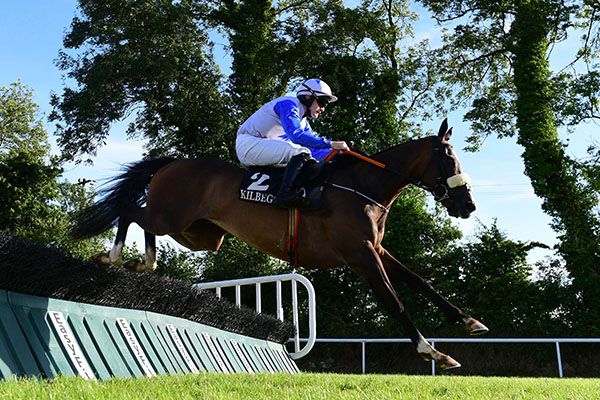 Esperti went one better than his recent Galway second, when keeping on strongly to win the Follow Kilbeggan Races On Facebook Maiden Hurdle at Kilbeggan.

Runner-up to Champ Kiely at last months festival. the gelding was continuing the great run of the Peter Fahey yard.

Fahey, who had four winners at Galway, was back in the winners' enclosure at Sligo earlier this week.

Kevin Sexton tracked the leaders in the early stages of this race on Esperti, before easing his mount into contention on the run out of the back straight.

Taking up the running turning for home, he jumped the last flight well and could afford to ease up in the closing stages.

“He's been running in very good maiden hurdles all along and after running well in Galway I spoke with Fergal (O'Neill) and we said we'd try and drop him into a lesser race and get a maiden out of the way with him,” said Fahey.

“He did it very well today and he'll tip away in handicaps now. He'll pay his way during the summer as he enjoys a bit of nice ground

“The last while we were struggling to get a winner for Fergal and he was saying to me coming into the ring that's his 15th winner with me so it's great as he's only with me the last couple of years.”

The Gordon Elliott-trained Ginnets Girl held the late challenge of Western Comandor to open her account in the concluding bumper at Sligo this evening.

Buckley off the mark for Cromwell on Clermont

Story stays on best to score again for Gibney

The Tom Gibney-trained Story Rory stayed on best on the run-in to claim the Francie 'Banger' Burns Handicap Hurdle at Sligo.