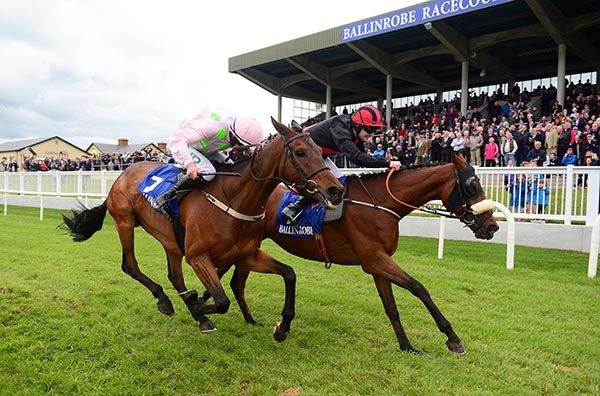 Top-weight Peregrine Run defied 11st 10lb to get up in the Mayo National at Ballinrobe.

Kevin Sexton produced him to tackle Pylonthepressure at the last in this staying test and his mount battled hard on the run-in to win by a head.

Mullins also had the third home, the well backed 2/1 favourite Ask Susan who was five lengths behind the battle for first place.

Trainer Peter Fahey said: “I honestly thought coming here that he was in better form than he was going to Killarney and I couldn’t believe the price (14/1) he was.

“It’s great for Kevin and he gave him a great ride. He’s a lovely horse and the quick ground here today really suited him. He minds himself and just barely puts his head in front.

“I don’t know what he’ll go for. There is a conditions race in Punchestown in a couple of weeks, and I have entered him on the Flat in Listowel.

“He’ll be busy over the summer as he takes his racing well on the good ground. I’d love to have a handicap mark with him on the Flat and go for some of the nice handicaps with him because he doesn’t lack a bit of toe.

“I’d love to say he’d go for the Plate but the ground often ends up being too soft for him at Galway. The few times he ran there he ran bad. If I thought the ground was going to be quick I’d love to go there but I doubt it.

“He’s some horse to have and I got some buzz out of that win today.”