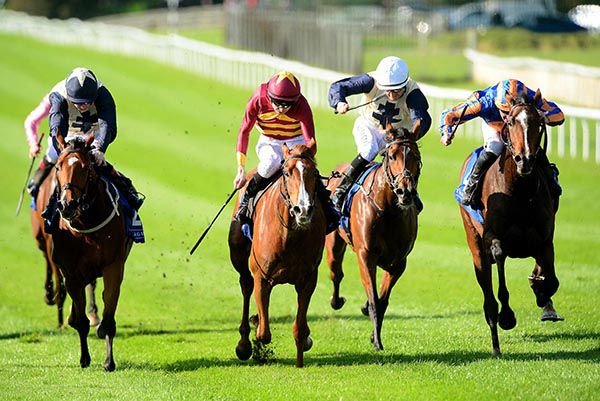 Fancy Blue got up in the shadow of the post in the Listed Staffordstown Stud Stakes at the Curragh to give Aidan O'Brien a treble.

This Deep Impact filly was shunned by punters as she drifted in the morning from 9/4 out to an SP of 4/1 for this mile race.

She had work to do in fourth inside the final furlong but kept finding for Seamus Heffernan to get up by a head.

Aidan O’Brien said: “She’s Donnacha’s really. He does everything with her at Longfield and knows more about her than I do. It was a hard choice which filly to ride and I kind of advised him the wrong way!

“She’s a good filly and was one of the few one of ours that won first time out. She’s a quality filly and Seamus gave her a lovely ride.” A New Dawn 15/8f, trained by Joseph O'Brien and ridden by Donnacha O'Brien was beaten into second. Auxilia completed the placings in third, a further half a length down.

Fancy Blue is now two from two having won a fillies' maiden in Naas last month.