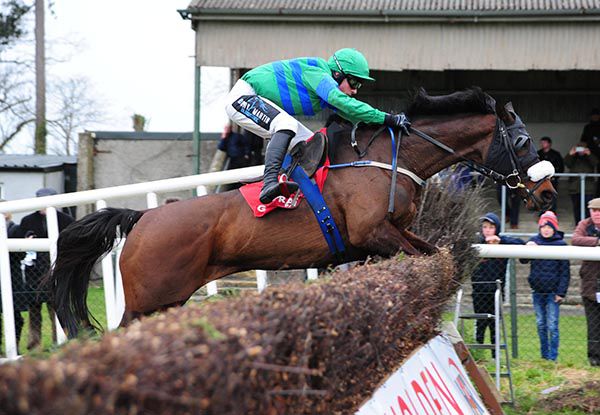 “We stuck the blinds (visor) on him because his jumping was a little bit high at times. I’d schooled him with them and he seemed to be jumping lower at home and Richie (Deegan) is top class and gave him a brilliant ride," summed up Declan Queally junior after Fenno's Storm went back to back in the Mullinavat GAA Club Fundraiser Tetratema Cup Hunters Chase.

Always to the fore, the race was Fenno's Storm's from some way out barring accidents, and he eventually came home with five and a half lengths to spare over the promising maiden victor Cle En Main

Well-supported earlier Fenno's Storm was easier to back on track - 15/8 out to 9/4, as the money came for Sizing Coal (2/1 into 6/4 favourite). He disappointed, eventually pulling up before three out.

“He’ll get an entry in the Irish National. If it came up heavy he could take his chance," elaborated Queally.

“Kildorrery is known for being an easy track but we wanted to get a run into him before here. It’s a downhill finish and the ground was a bit quick which didn’t suit.

“It was different around here over 3m1f and I’m delighted with him. It looked a good performance to the eye.

“We’ll see what the handicapper does with him (for the Irish National), and he can go for the Joseph O’Reilly as well. He’s only eight, and looks to be progressing.”

The Irish Horseracing Regulatory Board Veterinary Officer examined Sizing Coal, trained by J.T.R.Dreaper, at the request of the Stewards and reported the animal to be post race normal.