Foley strikes for the 1st time with Boss 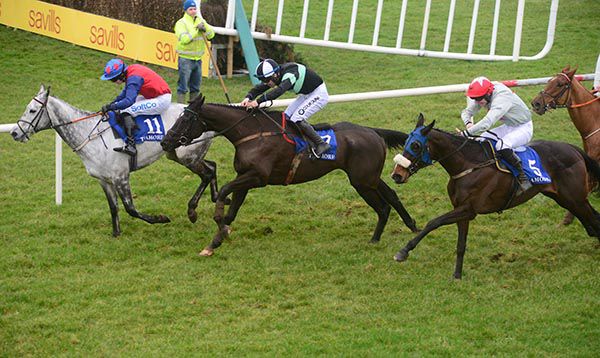 Fellow Rebel County contender, Capture The Action gave Knockraha Boss most to do, and after an exciting conclusion the eleven-year-old victor was a neck up.

Knockraha Boss has three point-to-point successes under his belt, but this was a breakthrough win on the racecourse proper.

“I took out a licence in March and that’s my first winner. Things have been a bit slow and he’s only my second horse racing," explained Foley.

“He’s done it well and Kevin has given him a great ride. He’s a horse that takes a lot of racing and seemed to love it here.

“He has potential but is an 11-year-old today and it’s his first win over hurdles. Hopefully the handicapper won’t be too hard on him.

“He should have won here last month but made a bad mistake at the last. He might go chasing when the ground gets a bit better. He wants either good ground or loose ground and it is a bit sticky today.

“I’m 26 and based in Rathcormac near Fermoy. I have eight in at the moment, and I do a lot of breaking and pre-training.