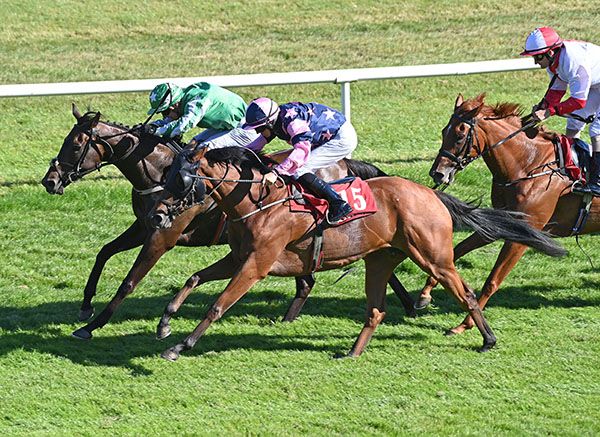 Front-running had reaped rewards in the opener and Killian Leonard was keen to get to the front on his mount in the extended nine furlong contest.

It was a deserved success for the Masterofthehorse gelding who had been claimed close home at Leopardstown last time after going clear at halfway.

The winner drifted left in the closing stages, causing some interference to the third Lily Of The Glen but the result stood after an enquiry.

Byrne said:- “It was an enterprising ride by Killian again. I watched it at the furlong pole and he got headed and battled back. We’re delighted with him.

“We have him back in a bit of form recently and you don’t get too many opportunities so you have to take them when you get them.

“There is a race in Galway in about a month’s time and we’ll probably have him out again in that. It’s a track he likes and he loves it in front.

“The owner (Tony Deegan) bred him and he has the mother at home and a few brothers and sisters. Hopefully he’ll have more coming down the line.”

Newcomer Quaresome, trained by Kieran Purcell, was a 28/1 winner of the season finale at Roscommon when landing the bumper.

Kartayaz finds for Van Buuren in Down Royal

Kyanna Van Buuren rode the second winner of her career on Kartayaz in the second division of the extended mile and two handicap at Down Royal.

Shoebox King gets off the mark in Down Royal

Shoebox King availed of stall one to take the Coors Handicap over five furlongs in Down Royal.