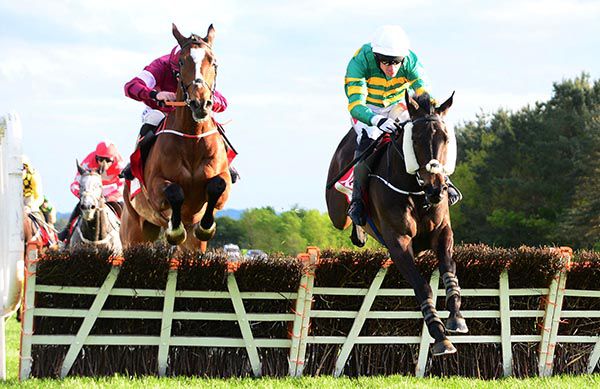 Gardens Of Babylon gained reward for a series of solid placed efforts this year when taking the Salessense International Novice Hurdle at Punchestown.

The Joseph O’Brien-trained gelding was placed in Grade 1 events at Leopardstown and Cheltenham and was sent off a 5/2 chance here.

Derek O’Connor took over in the saddle after Mark Walsh, who also missed the winning ride on Buveur D’Air in the Betdaq Punchestown Champion Hurdle, was sidelined after the second race with a suspected fractured right tibia.

J P McManus’ juvenile led approaching the final flight, and stayed on really well on the run-in to beat Notebook by six and a half lengths, with Dunvegan a further three and a half lengths adrift in third. Breaken took a keen hold in front but still appeared to be going well inside the final half-mile. However the 13/8 favourite found little when headed in the straight and eventually weakened to into fourth.

O'Brien said, “He's a nice horse and he's been in good form all season long. It's nice to get his second win today. He was just beaten in a couple of graded races so he only barely qualified for today's race.

“Derek gave him a lovely ride. It worked out well for him, there was plenty of pace on. He's had a good year and it's nice to finish off with a win.

“We think he might stay a bit further next season and he's big enough to jump a fence so he has loads of options. Derek said he was flat out most of the way and he came good in the straight for him.

“The leader went very quick in Limerick and won so we were a little bit worried about him getting away again because he looked very good that day.

“Today was probably a hotter race and we had a couple of horses to take us to him. I'd say the race worked out very well for us and Derek gave him a lovely ride. The way he races and the way he finishes his races he should stay a bit further.”