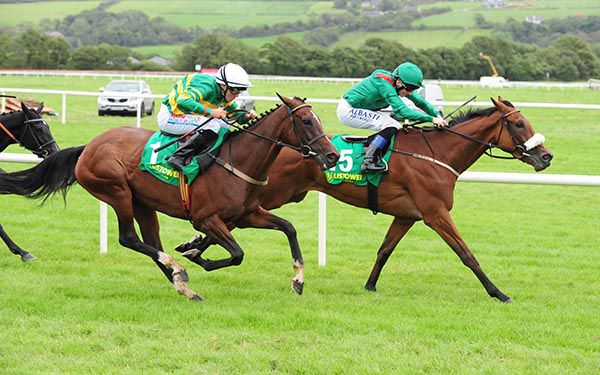 The leaders went hard in the MAC Fuels & General Supplies Fillies’ Maiden and John Queally’s Grade Two-winning bumper mare Getaway Katie Mai (10/1) came home strongly, having raced in mid-division early, to score by two lengths. Sheranda (9/4 fav) was second with Easy Come Easy Go (20/1), in the colours of Ronan O’Gara, another two and a half lengths away in third.

The wining daughter of Getaway, placed on her only start in point-to-points, was successful under a strong drive from Jamie Codd in the Goff’s Nickel Coin Mares’ Bumper at the Aintree Grand National meeting in 2018, and won a maiden hurdle at Tramore last December.

Here, she picked up well for Niall McCullagh in the straight to run down tiring rivals on her second start under Flat rules.

"Getting her toe into the ground is a big help to her, said winning trainer John Queally.

"She got knocked about a bit early-on coming out of the stalls at Killarney and never got into her rhythm.

"When I saw the ground here I gave her a squeak but it is a surprise to see her win coming back to a mile - it shows her ability.

"I'll speak to Frank (Berry, racing manager) but I'd imagine she'll mix it (between flat and hurdling) now."