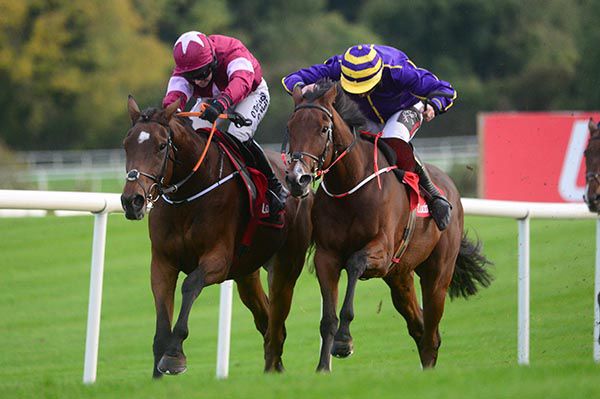 Gigginstown's initial ten runners today yielded wins with the Noel Meade trained Beacon Edge and Henry De Bromhead's Jan Maat but prior to the finale, trainer Elliott had endured a frustrating day for 'the maroon and white'.

Elliott's The Very Man was a final flight faller when challenging for the opener while the yard's Alpha Des Obeaux was touched off by Jett in the featured Grade 3 chase. More seriously, Elliott's jockey Jack Kennedy also sustained a possible collarbone fracture in the novice chase.

In the concluding bumper Elliott's runner Fantasio D'alene, under Lisa O'Neill, also appeared booked for second place as the 8/15 favourite was headed at the furlong pole by Good Time Jonny However to the four year old gelding's credit he battled well to eventually edge his way to the front close home, for a head win.

Elliott later said “he’s a nice horse and he could go for another bumper. It was a bit of a messy race and he’s really a staying chaser.”