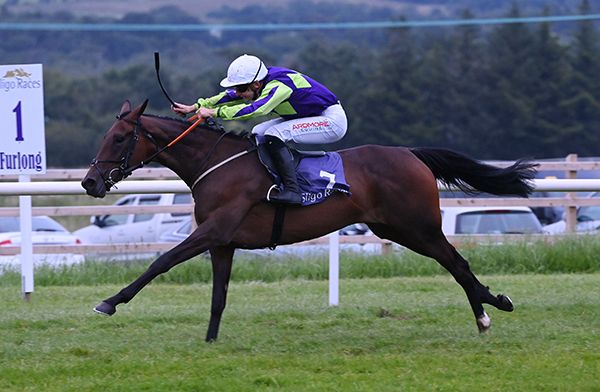 The Gordon Elliott-trained Ginnets Girl held the late challenge of Western Comandor to open her account in the concluding bumper at Sligo this evening.

There were plenty in with chances running up the hill to the home straight in the two-mile-two contest with John Gleeson coming wide to challenge on Ginnets Girl.

The daughter of Mamool hit the front early in the straight and had a bit up her sleeve late on to repel Western Comandor by half a length.

The runner-up objected to the winner having been slightly hampered before the straight when his rival lent right but the result stood.

Ginnets Girl, a 17/2 shot, was stepping forward from her debut effort, having been fourth at Limerick last month.

Gleeson said afterwards: "I'm very grateful to Gordon for giving me the opportunity.

"She was still a bit green and was running around in places but she's a hardy filly and stayed going all the way to the line. She'll learn plenty from that as well.

"We didn't go overly mad at the start and by the time we turned in, everyone was still travelling and I had to make my move. She toughed it out well."