Go Another One wins Perth feature for McConnell 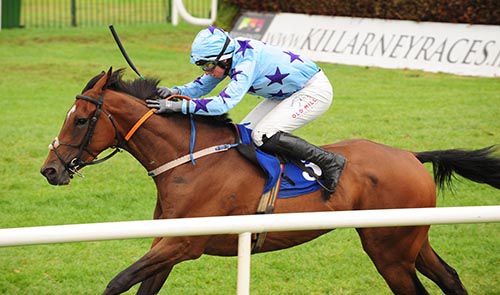 A late decision to switch targets from Fairyhouse to Perth paid off as Go Another One won the feature race at the Scottish venue on a good day for Irish raiders.

John McConnell had declared his charge for a E100,000 handicap on Tuesday, but in the end decided to send him to Scotland and he was rewarded with a straightforward success in the Listed EBF Stallions Gold Castle "National Hunt" Novices' Hurdle.

Ridden by Richard Johnson, the seven-year-old was racing over three miles for the first time since July, but he saw the trip out well as the 2/1 favourite.

Gordon Elliott’s love affair with the track continued as Braid Blue (evens favourite) won the Heidsieck Monopole "The Party Has Started" Maiden Hurdle, the first leg of a double for Johnson.

Incredibly it was Elliott’s 172nd winner at the track since his first back in 2006.

"It's hard to believe how many winners I've had here," said Elliott.

"It's been very lucky here for me — I trained my first winner here.

"Jason Maguire used to ride them all, then AP McCoy - he wasn't too bad - and then when he went, we went for Richard Johnson so we've been lucky with the jockeys and our horses seem to like it.

"He’s strengthened up a lot since last year, he’s been given plenty of time and he’ll jump a fence, he’s still weak and raw though."