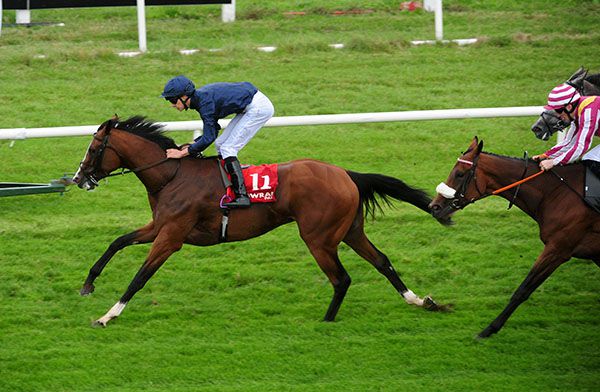 There was certainly no market confidence in the chances of Goddess ( generally 6s in the morning, returned 14/1), but Aidan O’Brien’s filly belied the negative vibes from the ring by taking the listed Irish Stallion Farms EBF Hurry Harriet Stakes at Gowran Park.

Completing a quick 89/1 double for winning jockey Donnacha O’Brien, the daughter of Camelot was produced with her challenge down the centre of the track as the field fanned out looking for the best of the yielding to soft ground in the straight.

She hit the front over a furlong from home and kept on well to beat Tipitena (33/1) and the 11/10 favourite Who’s Steph by a length and a quarter and half a length.

There were very high hopes for this filly after she won a Leopardstown maiden by ten lengths last year, but she disappointed on her next outing and has gradually come back to form this season, finishing second in a weakly-contested Group 2 at the Curragh most recently.

The winning trainer Aidan O’Brien remarked: “I'm delighted with her. She's been progressing lovely, with every run she's slowly been coming.

“She had a lovely run first time, then went and won very well in Leopardstown, and then she ran disappointing on her third run when our horses were probably a little bit under the weather at the time.

“It just took a little bit of time to get her back and she had a lovely run in the Curragh the last time. She's slowly coming back there.

“Donnacha said she's going to progress now. She's not short of speed and would have no problem going back to a mile.

“She was group placed the last day and we'll maybe look at a group race with her the next time.

“The fourth filly was having her first run of the year, she's a sister to Winter, so it was a lovely run.

“She's a filly that just had a few hold ups so it's good to get her started.”