Gold for Guaranteed in the Silver Stakes 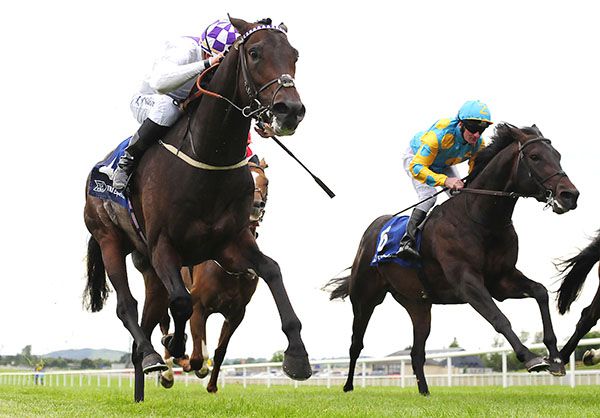 Guaranteed bounced back to his best, as he just prevailed in the Listed TRI Equestrian Silver Stakes.

A winner of the Group 3 Eyrefield Stakes in October, the Jim Bolger trained three-year-old failed to make an impact on his next three starts.

His most recent effort did come in the 2,000 Guineas here last month, and back up in trip to a mile and two this evening, he was sent off a 7/1 chance (14s in early shows) under Ronan Whelan.

Soon in front, the son of Teofilo was ridden under two furlongs out and proved game under pressure, holding off the late surge of Riven Light by a short head.

In truth, the Colin Keane ridden runner-up can go down as an unlucky loser. He needed to be switched off the rail from the two furlong pole and once in the clear he powered home, but the line came just too soon for the Willie Mullins trained 11/2 chance. Old Glory was the gamble of the race, and having opened on-course at 10/3, he eventually went off a 15/8 joint-favourite.

The Aidan O'Brien trained colt had every chance from the furlong pole, but ultimately had to settle for third, half a length off the front pair. The King was the other joint-favourite, and he finished a slightly disappointing fourth.

"He stayed at it well," said Bolger.

"He took a while to build up to it as a two-year-old as well.

"I think he can step up in trip and you could possibly see him back here in three weeks time."

The Stewards interviewed J.A. Heffernan, rider of Old Glory, concerning his use of the whip in the closing stages of this race. Evidence was heard from the rider concerned. Having viewed a recording of the race and considered the evidence, the Stewards were satisfied that one hit was for corrective purposes and therefore the remaining number of hits did not breach Regulation 10, therefore the Stewards took no further action.

The Stewards wished to enquire into a breach of Regulation 10.3 (g) by R.P. Whelan having viewed the recording of this race. R.P. Whelan accepted that he had three previous offences under Regulation 10 since the new whip rules came into effect. Having considered the rider's acceptance of his disciplinary record in relation to Regulation 10, the Stewards in accordance with the provisions of Regulation 10.6 referred the matter to the Referrals Committee for consideration.