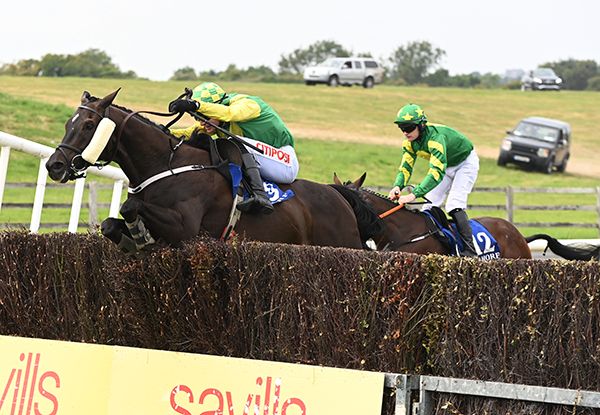 Golden Sandbanks made a winning foray into handicap chase company at Tramore.

He was victorious in a handicap hurdle at Limerick last month and it was more of the same on his first crack at fences.

The 9/4 favourite powered home on the run-in to win by four lengths from the 11/1 runner-up Clody Valley. Cracklinrose was another three and a quarter lengths back in third at 4/1.

Trainer Paul Flynn said: "The lads wanted to go for the handicap hurdle because they thought he would win it but, with that new rule and the fact he jumps so well, I wanted to expose that a little bit.

"He jumped great and Danny said he gave him a great spin. We will try and sell him now. We tried to sell him after his last run but we had no takers. Hopefully now someone will buy him when they can see he jumps a fence.

"He really wants good ground and the way they water tracks in Ireland now is a disaster for him. The only thing that kept here good was the weather. They put a lot of water on and wouldn't have cared had it went yielding, that's the way it is now. He is a good-ground horse and some tracks just over do it with the watering.

"Paddy (Ryan) has lots of horses with Iain Jardine and this horse might end up over there."